Marie Kondo's at it again.

Among the mass of promo for her new book, one bright spark was a typically insufferable yet expressive columnist with the joyful idea of getting the great lady to tidy up her home office desk.

As the subsequent piece's quartet of pics begins, yes, it's a shocker. But also yes, eerily familiar. 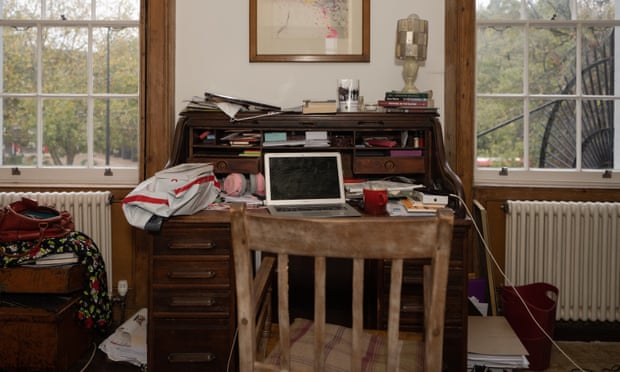 As where the laptop webcam appears to angle is perhaps revealed later to be a plain magnolia painted wood panelled wall, it's a zoomable spot. Albeit a small step beyond hostage video. Yet serviceable all the same. But the issue is, how on earth can you communicate properly without a single square inch of clear space around the desk and its frame?

I look back on many rewarding hours spent going through zoomscape and zoomroom setups of others. Both in homes and offices. And that this keystone building block is so often not only overlooked, but can be mistakenly dismissed is a real opportunity squandered.

Indeed, the very first chapter of my book on this (subtitled 52 Ways To Get What You Want From Virtual Meetings) builds from this central starting point. Titled Be A Meezer, it shares how cultivating your workspace is both important and achievable. The effort pays you back on every call.

Interestingly, the subtext of her current theme, is to cultivate space that "fosters conversation". Which is precisely what paying attention to meezering up your own video rig will bring you too. And from conversation comes engagement. Which flows all the way through to agreement.

Suffice to say, without going into an exhaustive list, the offering in the pic above would benefit from having ability to plinth the laptop, the graspable prop such as clipboard and markers, and a raised lamp more suitable for near 45° illumination when that frontal daylighting disappears.

There's a further point from this KonMari method reminder too.

“I have a joy in seeing room for tidying”.

It's part of a conclusion marvelling that 'nothing fazes her, least of all chaos'.

Given that her famous catchphrase in determining an item's destination is the bin is whether it may "spark joy" when held in your hands, it's neat language to know what sparks joy in her.

We when selling I'd suggest need to feel similar joy sparked.

What is the scene of 'chaos', anywhere along the scale of its various stages that sparks for us?

What is the situation we seek to remedy with relish, equivalent to her "seeing a room for tidying"?

What's also pertinent about her angle, is that she sees such places when invited to do so. The aspirant declutterer wants help.

So our frame ought not be confrontational or be seen as unwelcomely challenging.

For my present endeavour, one such example may well be - once commissioned;

'I have a joy in seeing a video meeting trundle through the motions'.

That is absolutely not to take pleasure in the participants' pain. This is because I know that those involved wish to "tidy" it up in some way. And that I'm the man with the ideas to make it so for them.

What version of this works for you?