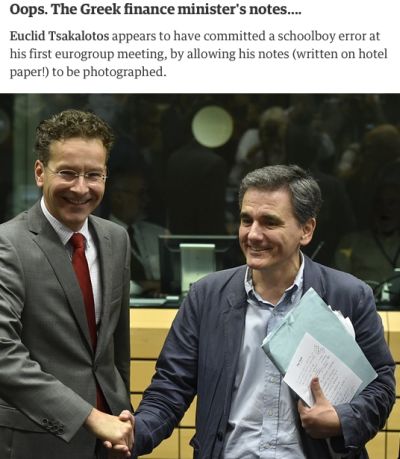 Greece are heading for years, decades even, of fiscal misery.

I sense this not because of the “oxi” referendum victory on Sunday, but how their politicians approached the subsequent re-negotiation.

Still, where one loony left winger goes another appears.

His successor (Euclid Tsakalotos, named after the Greek inventor of geometry), attended the much anticipated talks, now promoted from helper to leader.

As seen above in his left hand, he turned up at the make-or-break meeting with little but a sheet of hotel notepaper with a few scribbled notes on it.

Zoomed in close ups of the actual sheet sped around the web.

“No triumphalism” the phrase singled out the most. Unimpressed anger relayed from the creditors who considered a hurried one-page brief an insult.

Those with the money were beside themselves with exasperation.

No new plan whatsoever and what looked like a small page of scrawled notes a sorry excuse for thinking ahead.

IMF chief Frenchwomen Christine Lagarde has described the Greek team as behaving like “children”. The Germans have been equally scathing. Everyone was expecting something yet were alienated by the lack of Hellenic thought. As media reports, “the Greek tragedy turns to farce”. Or as London’s The Sun tabloid put it, “Zorba the Cheek. Fury as Greeks rock up to key summit without a new plan”.

It is a frustrating fact that Sales attracts many a maverick. Sometimes defined as those that think they can wing it. Every time, all the time.

Maybe like revision for an exam, much of what you cram will go unused. So why bother with anything, hey?

This has an opposite pole. Rarer, where hours of misplaced, slow, wrong-tree-barking work replace time better spent prospecting in person elsewhere.

There is huge fertile space in between.

As winning salespeople we must inhabit it.

Ideal prep needn’t mean you wreak of midnight oil. Nor should it lead to shuffling in with a filing cabinet’s worth of papers. You don’t even need to get your notes typed up.

Diagrams look good. Tables too. Flow chart decision trees. Graph thumbnails can also go down well. And anything that comes from the perspective of the other side of the table is always a winner.

In this case, no deal is estimated to then cost ordinary Greek people a whopping third of their wealth. Avoid making your own costly “schoolboy error”. 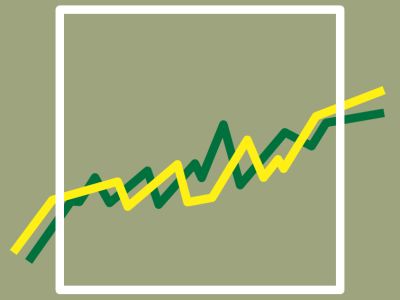 My depiction of the sculpture that hangs from the ceiling in the Athens Stock Exchange atrium.