Always keen to follow a slideshow making the news, The Washington Post seemed to snare a scoop recently.

Beaten by Obama in the American 2012 White House race, Mitt Romney likes to spin that he’s since been proved right.

He held a 3-day summit for the chatterati in Utah; E2 – with the pair of E’s standing for Experts & Enthusiasts.

An audience of 200 was treated to twenty slides in a slot headed “The Most Consequential Obama Foreign Policy Mistakes”.

Sadly no visuals of said powerpoint output has seeped onto the web.

Which is a shame. It would be fascinating to see the Powerpoint work of a big ticket management consultant (he led both Bain the strategists and Bain the VCs)’.

What the paper does report follows their headline adjective “brutal”.

I was intrigued by the title itself. Using a pincer of emotives in “most consequential” and “mistakes”.

Especially when remembering many an impenetrably dry title I’ve seen in the field bafflingly towards the scientific-paper end of the spectrum.

We learn 20 foreign policy mistakes are awarded a slide each. How buzzfeed.

Three of their titles are passed on;

Quite snappy, and certainly convey where he’s coming from.

Do your slides prompt such recall?

And do you stick to one point per slide?

In terms of visuals, we are informed of an obligatory map.

Regions across the globe colour-coded according to the Republican’s desire to exert soft-power or otherwise.

Then there’s his call to arms. What does he want us to do? Here it is as tweeted by his Foundation; 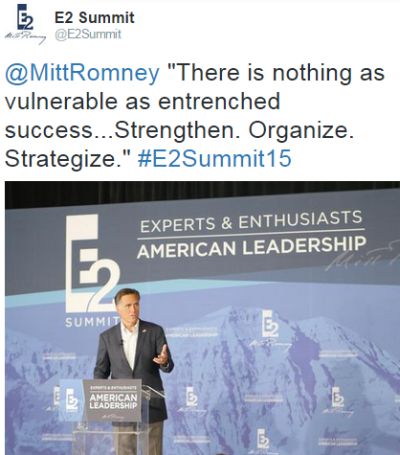 To which Mitt apparently added a brand TLA (three letter acronym) so beloved of b-school;

SOS. Beyond parody to such an extent that it actually works.

So, five pieces of guidance to check against your next deck in each of;

overall title, each slide title, one point per slide, a map, call-to-arms