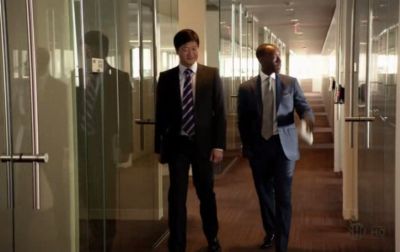 House Of Lies. A terrific show built around the dysfunctional life of a stellar management consultant salesman. Not for the faint-hearted.

There’s many a blog you could write on the sales skills used throughout.

The protagonist’s main approach seems to be verbally batter the prospect until they buy into his own vision. Usually, how much better and more wonderful their life will be when they do as he says. Less the fabled old fear-uncertainty-doubt, more scared witless, eaten alive through indecision and don’t die not knowing.

Here’s the 25 second exchange shown between Los Angeles property agent and prospective tenant. Our hero, looking to ‘start his own shop’, is Marty Kahn (deliciously played by Don Cheadle). They’re walking back to the lifts after a tour of the empty office space.

Agent: This brings us back to the lobby. What do you think?

Agent: …huge players, should I [slight pause] include yours? 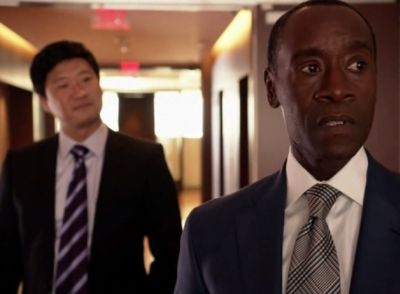 The look on Marty’s face – and avoidance of eye contact – at the end could mean many things. Does he hate having the kind of hardman tactics with which he’s so familiar used on him? Or is it good use of a qualification close, being both aimed squarely at the prospect’s personality as well as him being potentially unsure whether to really take the plunge now on leaving his established firm to start-up himself?

The agent may well get the result he craves.

Yet this is bad selling.

It belongs in the museum.

He’s patently not interested in the client. And will struggle to gain sustainable business. Even if he doesn’t have to work hard for his money right now.

It is a crying shame that this is how so many people think selling should be done.

The closing sequence makes for great telly. And is perfect in a show full of dazzlingly put together rapid fire set pieces.