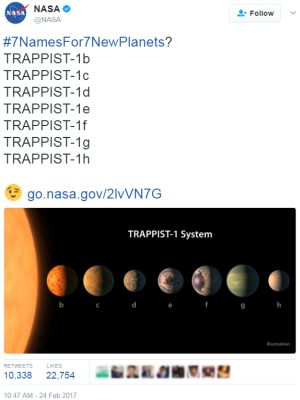 Nasa must have known what was coming.

There’s potential for life in a Goldilocks Zone a mere 40 light years away. That’s 700,000 earth years at our present max travel speed.

Around a star named Trappist (after the initials of the Chilean telescope that found it) there’s seven planets.

Nasa asked the world to name them.

Yes, the offspring of the original BoatyMcBoatface streamed forth. Perhaps a shame poor Harambe didn’t have a large troop.

Just about any famous seven-strong grouping got an airing. Some truly creative, others laugh out loud fun.

From Earth 2s 128gb Rose Gold via Wanda through to Tell A Lie & Hurt You, there’s quite the selection for the rocket scientists to choose from.

Project naming. It certainly holds a worthy place in selling tactics. Here though, comes the associated concept of forming a personality for a specific set of podium topping traits.

What about the trio or quartet or even quintet and beyond of famously wonderful new capabilities your offering has?

It makes for a catchy fresh way to promote the key benefits internally.

How about the couplet or triplet of most desired prospect outcomes? Again, if informally created with the people concerned themselves, you could well gain a crucial step-up.

As I blog today I’m reminded of a Beatles nut I encountered recently with whom I now wished I’d have labeled a particular fourpiece John, Paul, George & Ringo…!

To where in your universe can you travel at such intergalactic speed?