I nearly quit this around twenty-five minutes in. The docudrama element that ran alongside interviewee reveals was getting a touch tedious, many talking heads were blurring into one, and there was a lack of engaging arc to their narrative.

I persevered. As is the motto of my alma mater. When the credits rolled as the ninety minutes wrapped – “turn off your notifications!” – it wasn’t that I hadn’t enjoyed what transpired, it was that it didn’t really knock you over with anything you didn’t already know.

What was of interest, were the handful of selling tips contained within.

There were interesting slide devices.

Ones we can readily adapt for our own needs.

The quotes they put up, mostly to re-iterate what had just been or was being said, were simple and followed the same template.

For instance, from author Shoshana Zuboff on what Big Tech sell; 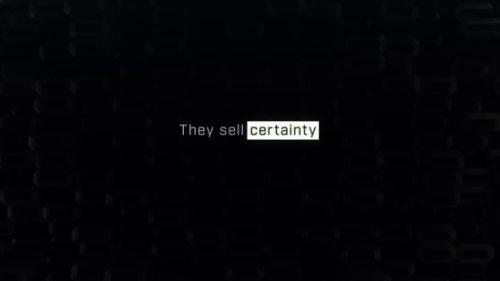 Although their backdrop could have been a bit better.

The charts they displayed were all animated. To show progression over time.

From the heartbreaking (young American girl self-harm and suicide comparisons pre- and post-social media) to the depressing (twenty years of American political polarisation increase) and the startling. The latter being when the one-time head of ‘Facebook Growth’ ran through improvement in FLOPS (which in computing, stands for ‘floating point operations per second’; a measure of computer performance). Consider his accompanying words;

Roughly, if you say from, like, the 1960s to today, processing power has gone up about a trillion times. Nothing else that we have has improved at anything near that rate. Like, cars are, you know, roughly twice as fast. And almost everything else is negligible. And perhaps most importantly, our human physiology, our brains have evolved not at all.

Which ended with this classical ‘hockey-stick’; 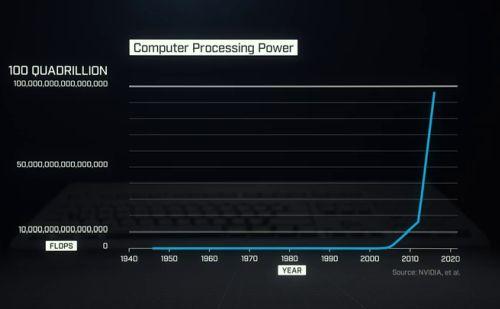 Then there’s the pitching.

We’ve all had to begin a ‘speech’. Hoping to define a problem. Teeing up the change required and holding up our (unique) resolution to it.

Here’s how chief protagonist Tristan Harris intros his call to arms on stage;

So, today, I wanna talk about a new agenda for technology.
And why we wanna do that is because if you ask people,
“What’s wrong in the tech industry right now?”
…there’s a cacophony of grievances and scandals.
And “They stole our data.”
And there’s tech addiction.
And there’s fake news.
And there’s polarization and some elections that are getting hacked.
But is there something that is beneath all these problems that’s causing all these things to happen at once?

As one of his rehearsal buddies notes with initial feedback, it is indeed “very good”.

He uses a similar structure to make another argument later on.

As these two linegraph points sprung up on the curve (for ‘overwhelms human strengths/weaknesses’); 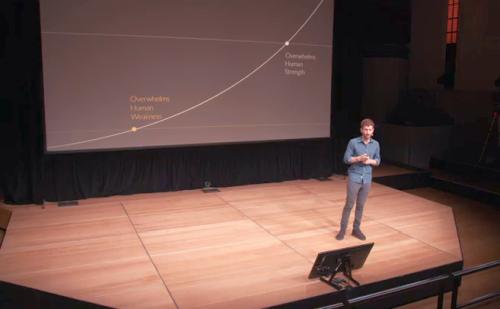 We were all looking for the moment when technology would overwhelm human strengths and intelligence.
When is it gonna cross the singularity, replace our jobs, be smarter than humans?
But there’s this much earlier moment.
When technology exceeds and overwhelms human weaknesses.
This point being crossed is at the root of addiction, polarization, radicalization, outrage-ification, vanity-ification, the entire thing. This is overpowering human nature, and this is checkmate on humanity.

I love this technique of rattling off a list of quickfire points. As his here, best deployed to outline issues. The longer, the better.

The best I saw in a business setting was from the head of security for a multinational bank. They listed the labels for all the types of wrong-doers with whom they must battle everyday to keep out of their systems. There felt like forty. With practised delivery, starting slow, pausing, then getting quicker. Muffled laughter emerged half-way through. After reciting them, he had the audience in his hand. There was even a ripple of applause.

Perhaps one of the most renowned examples in my popular culture bank was when the Sacha Baron Cohen character Ali G was ‘interviewing‘ a British drugs expert. After identifying what he called “Moroccan Black” on a table in front of them, he asked;

“What is the names for it? I mean, we all know it’s called the bionic, the bomb, the puff, the black, the ‘erb, the sensei, the chronic, the sweet Mary Jane, the shit, the bomb, the Ganja, the reefer, the bad, the buddha, the ‘ome grown, the ill, the maui-maui, the method, the pot, the shake pit, skunk, stress, the tie, the whacky. But is there any other terms the parents should be aware of?”

Twenty seconds of glory. 24 ‘streetnames’ read off a sheet. One cheekily repeated. Even the official started smiling. Despite the seriousness of the situation. Who then for good measure added, “puff, blow, lots of names, draw…”

Tristan Harris only needs a half-dozen to make his point. And does so with audience duly enthralled.