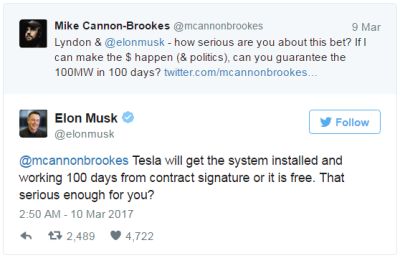 But when a media darling billionaire of comic strip proportions asks for a hundred million dollar deal by tweet, well, it truly is the stuff of memes.

There’s all sorts of (fairly vital) background context you can glean from your news feeds of choice.

So let’s start off by stating a disruptive-leaning energy project is pitched at a municipality suffering power outages.

A proposal which pretty much claims a working reference site elsewhere. Delivered there for a cool $100m.

What is striking about this so public of closes, is that any experienced buyer would never go for it.

The image of such “no work, no pay” offers tarnished the nascent tech world “eval” ideas.

A big part of the problem is that without the exchange of cash for a fair trade of goods and services, the whole endeavour tends to collapse the second something non-standard, unusual, extra crops up. Which does so. Often immediately.

Ask anyone ever buying a ‘complex sale’ about “project creep”.

That isn’t to say I don’t approve. But the more it sounds like a mere gimmick, the less it should be taken up.

An Evaluation Close though, can be a real winner.

Yet it must not fall into the trap of its common nickname, The Puppy Dog Close. So coined in memory of any parent persuaded to take one home by a pet shop owner “just for the weekend”.

Nor can it have the sniff of an “on-spec” deal. Whereby a ton of work is done upfront by one party alone. Typically one with less overt power in the transaction. With such little guarantee of eventual payment that none ever seems to result. Designers and programmers in particular found movements against such in the name of exposing exploitation.

Let’s be positive for a moment. This may well be that rarest of bloom. The genuine turnkey solution. Plug ‘n Play. Offsite pre-fab’d construction installed onsite fully operational.

The differences on such huge infrastructure jobs between Day One and On costs will be familiar to more than just procurement professionals.

I do get it, though. As a classic new entrant land grab tactic.

It ranks alongside the ‘free to have then we share in savings/profits’.

A concept that’ll shudder anyone wondering how at one stage scarily close to being the planet’s most expensive building, the Sino-French Severnshore nuke plant, might go.

Far be it from me to dish out sales advice to someone so dwarfing the tatty collection of banknotes under my mattress, but leading on the money here does not feel the way to success.

Who in this case really cares about the cost? Politicians? Voters? Company founders?

An undertaking of this magnitude clearly has a telephone number price tag.

Competing vendors can reveal their Dutch auction cards for official scrutiny as and when.

Surely the deal clincher here is not any zeroed initial outlay. It is time.

And that’s what my sales antennae likes about this Elon Musk close. So long as from there, proposals that properly, openly share in the burdens and benefits gain consent then that should get you home.