I was wondering through a sparkly regenerated town centre the other day and passed a new store selling smart gentlemen’s “fine tailoring and etceteras“.

In the mould of the explosion of such English outfitters from a decade ago (Pink, Hawes & Curtis, TM Lewin, Charles Tyrwhitt, Emmett, Hilditch & Key) I couldn’t help but notice their lairy socks. Clearly designed to dazzle more than I enjoy, they did though encourage me to pop in and have a quick gander. 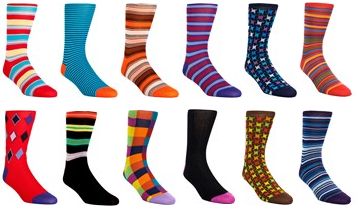 The empty shopfloor had three chaps working it. One was young and new, another a ‘manager’ – in on his day off – and the man approaching me a highly confident evangelical ambassador.

I was only there to look at socks really so, when immediately approached with the dreaded ‘you alright there?‘, I enquired whether they had anything “slightly less Duchamp“. With my initial thought that Paul Smith are more my style in their price bracket (£14 a pair) I was ready to leave with a mental note to check them out another season.

After I confided their socks were a little extravagant for my taste I did ask what they were made of. Give the retailer credit, I was invited to feel their “mercerised cotton“. More colours were rapidly presented from a drawer. Despite my continued assertion that they were not for me, the following close was proposed.

Shall I ring them up for you?

The snag was, this merely served to encourage the fella overboard. From then on, I was subjected to a battery of closes. Each iteration grew in both irrelevance and unwelcomeness. I became stuck in a shopping hell.

Once he’d decided to ‘go for it’, his frustration escalated, eliminating the geniality and ending the hope of any financial transaction.

Whilst he’d gone farther than most in his retail position, at no stage was I asked questions like “what are you after?”, “what kind of thing does your wardrobe want?” or “which of these are more your style?”

He never rotated from his personal focus of ‘making his sale’ towards a mindset looking to generate a relationship with me instead of a one-off hit.

As a result, he didn’t just lose a customer on that day, but likely for all time.