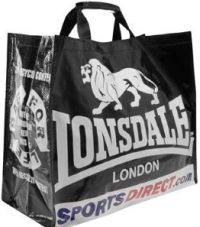 The shame of it, I found myself buying from Sports Direct. I’d already been asked if I’d like special insoles, for just £7 reduced from 20, by the lad that’d got my shoe size. Then at the counter, the cashier went for further extra sales. It’s obviously a company vibe.

The items I was asked to add on to my purchase were a glossy two quid sports magazine and a stronger, bigger carrier bag. Latter pictured above, for either a pound or one-fifty for the larger.

Yes, this is retail – and I have blogged about this specific tactic before – but even so, at least they are asking the question. Although how many people say no as an automatic reaction or feel put out by the impudence meaning future sales damage is a clear unknown.

My server revealed that one in twenty buy the bag. That’s 5% of all buyers prompted lead to an extra quid or so.

Sadly it appears “hardly anyone” buys the mag.

Around the same time I was also in an off-high street electrical gadget retailer. At the checkout in Maplins I was prompted to buy both discount battery packs at various small amounts around a fiver, or a phone battery emergency spare charge for a tenner.

The chap in front of me actually bought some batteries. So naturally I quizzed my server on his success. He proudly divulged “better than one in ten”.

You can play around with how much per transaction or what precise overall margin uplift follows, I’m sure.

The point is that said uplift does exist.

Just from asking one little qu…

Take the irritation out of it then think, how can this be applied to your till-ring?

..and worth noting this is a far cry from the skill of a Singaporean Indian I once encountered.