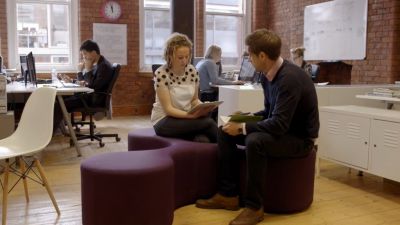 Spring cleaning time. Or Autumn rather, if you’re southern hemispherical.

What an office I picture up top. A famous place d’you think?

It’s a shot from one of this year’s UK local election political broadcasts. Balance prevents me from shaming the name.

Clip art is still kicking. Morphed into modern day digital forms. And it is horrible.

Loyalty prevents me from showing pics from offices I’ve sat in that more resemble the ill-maintained sanatorium, rather than the stimulating surrounds of the driven salesroom.

Can we surmise that underperforming teams tend to inhabit soulless sets of cubicles bordered by the odd breakout goldfish bowl?

My continual bugbear bubbles. That sales workspaces are too often commanded to give over what little wall estate they possess to (irrelevant) marketing (and corporate) messages. Instead of essential Sales related reinforcement.

As for floor use, you needn’t go to the lengths (and expense) of the insatiable tech community. Such as this impressive place created a couple of years back in London, where railway carriage meeting rooms are the least of it.

As a piece in this week’s Times pullout planning The Future Of Work dryly notes; 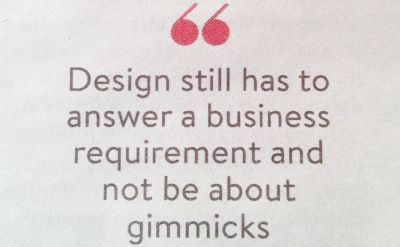 Sellers are a social lot. Think of their collective noun. When it should be praps a Signatures of salespeople, it is often more like a Chatter of them.

Yet two of the biggest needs of salespeople tend to be under-represented. Neither require bar football or ping pong tables.

Privacy. Specifically, for pivotal, involved phone calls. Where concentration is key. (One designer refers to these as “cockpits”.)

Planning. Somewhat mistakenly termed ‘strategising’ when it more concerns riffing on call tactics. When collaborating you need to spread yourself and your papers and your whiteboarding scrawls.

If you can lay on rooms for these that don’t feel like a sci-fi holding cell, then you’re moving in the right direction.

See results rise and not a Hawthorne Effect in sight.