At a fundraiser for their local community initiatives, I came across a cracking idea for a moment of levity at an internal sales meeting. One which can also lead whoever introduces it onto making a serious point or two. 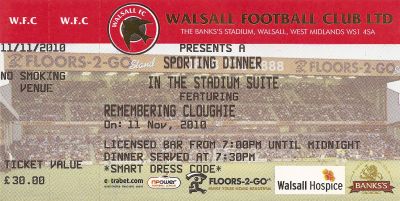 At these Walsall Football Club events you pay a pound to take part in their True or False Game. All 250 people in attendance expectantly went for it.

The master of ceremonies makes statements based on the theme of the evening. You simply have to decide whether it’s True or False. If you agree, then hands-on-heads indicates your belief in True. If you fancy it’s misleading, then hands-on-backsides shows you suspect it’s False. Everybody stands up to play.

As the night was all about “Remembering Cloughie” and his football management genius, the first poser was “Brian Clough began his playing career at Hartlepool”. I knew this to be False. It was his managerial career that began there, not his playing days which were at Middlesborough. Remarkably, around three-quarters presented their hands on their heads, thinking it was a True statement. So they all had to sit down straight away.

A few rounds in, and the final dozen or so were invited to stand at the front of the venue under the stage. I was still in and thoroughly enjoying myself. I made it into the last three by knowing that Trevor Francis scored his European Cup Final winner in old Olympic stadium in Munich, not Rome.

Bizarrely, the lad to my left confided pure guesswork was consistently his saviour. My knowledge though then ran dry, and the prize of a bottle of Moet went to a deserving victor, one that wasn’t guessing.

As an activity, it seemed to go down very well. People were talking about the answers long into the night.

It immediately struck me that for any internal get together with at least a dozen attendees, it would be a terrific idea to adapt to your sales arena.

A few tips for a similar sales meeting twenty-minute agenda item of your own occur to me.

Topic – chose a theme that aligns to a key current strand of your sales efforts
Timeline – try and pick a logical chronology or theme to run along
Detail – make sure there’s plenty to say about the reasoning for each answer as it’ll stick
Difficulty – try and make the questions start off easy-ish and progress from there
Involvement – don’t be afraid to ask the crowd no longer ‘in’ for a vote on a statement that splits the remaining contestants
Blindfold – when the final stages arrive, make people turn around so that they can’t see each other and be (subconsciously) influenced
Prize – a small token would add a little competitive spice and provide incentive to concentrate
Point – bear in mind a serious point you want the questions to make