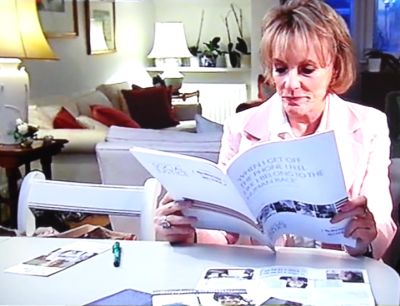 I caught the New Year’s Honours List coming out of London first on Sky News.

The most recent of these, The Silver Line, is a helpline for the elderly.

My screenshot above shows her flicking through a report evaluating their operations.

I was instantly struck by the cover design.

Yes, there are logos of the authors at the foot.

And some photos of those they’ve helped. The kind of thing that often looks worryingly 21st Century clip art but here looks alright.

Most importantly, there is a quote up top that takes up lots of page estate.

From a design view, even though it dominates the page, its understated thin font is in contrast to the capitals treatment for added punch.

Then there’s the actual message.

The words are clearly meant to sum up the feelings of those affected.

And it works. Beautifully.

I’ve often railed against proposals I’ve seen in salesrooms that feature bog-standard recital of the procurement title with logo splashes. Worse still, you get covers stipulated by Marketing full of inappropriate corporate colours and photoshoot drivel.

Your prospect’s logo, a description of what the project sets out to achieve and your contact details. That should pretty much do.

But now I’ve seen this it’s time for a new version.

Talk to the person with the most clout you can at your prospect.

For spice, also try someone that whilst touched in some way by what you provide, is perhaps so low down the org chart they may get overlooked.

Chat about what’s most important about how the future looks to them.

What do they want to be able to do that what you supply will enable?

Focus on the emotion.

Write it down as soon as you can.

And plaster it on your Prop cover just like this.