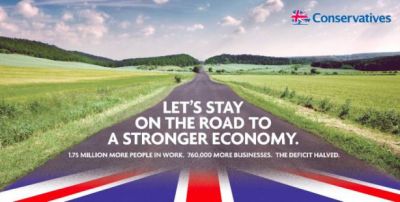 There’s an election looming in the UK Spring.

The ad (above) evokes a road to recovery that can only continue with their trusted driving.

Opponents on the left were quick to deride this ‘road to nowhere’, as you’d expect. Labour scorned the road lurching to the right, Liberals called it a “highway to hell”. So much for positive messaging.

The more balanced press pointed to the image used.

No lamp posts or white lines. Doesn’t it look a bit (and so a cardinal sin) French?

(It actually turned out to be a German landscape!)

Or for class war dinosaurs, does it more feel like the long driveway to a stately home?

So the imagery could be better? Although if you need a neutral ‘road to recovery’ pic, what choice do you truly have?

But the hottest debate revolves around the text.

Specifically, the small print under the headline;

And of this trio, it’s all about what’s tucked away in the bottom-right corner; 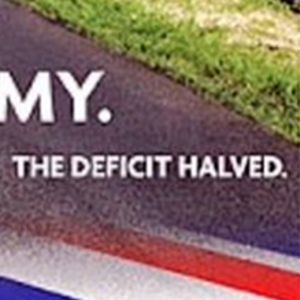 The Deficit. The difference between monthly income and expenditure. (As opposed to Debt, which is the total accumulated owings, sent spiralling out of control throughout the Naughties).

Yet the figure is right. Kind of.

It all depends how you work it out.

The incumbent leadership point to the independent, official, OBR (Office of Budget Responsibility). They cite the number as a percentage of GDP. In which case, it has ‘halved’.

Whereas anyone not from the co-ruling Conservative party, prefers to look at the pounds sterling amount. In which case, the cash has come down by roughly only a third.

So. What about your figures?

The ones you base your business case on?

Can those against you undermine them?

Can those with you solidly support them?

I always preach to go conservative.

After all, emotion decides the deal, not the numbers. Yet the wrong numbers can easily scupper your prospect’s voting intentions.

(footnote, I’ve blogged on this subject several times, including this short post from precisely seven years ago;  Choose the right figure)