Two thousand words. Across six pages. Only a main headline with two section titles, one with four subheadings, for breakers.

Not the kind of document you often see in selling. Whether sanctioned or suggested. Yet this is an incredibly important piece of prose.

Within two years there is a referendum in my homeland. Should Britain remain in or leave the European Union? This letter is meant to form the basis of what must change so that the people vote to stay.

Before we look at the delicate brush strokes, let’s first view the wider canvas.

It is sales collateral extraordinaire. Aimed to convince doubting decision makers and influencers alike. Hoping to provide the platform from which the buying builds. Shaping the spec.

It certainly does not look like a modern sales instrument or business report. Blocks of text aplenty. Few bullet points (only a sole bunch of seven). No page headings. No tables. A continuous flow.

It is remarkably similar to the very first doc I was ever taught to send. That tricky correspondence which follows your first prospect meeting. I still sometimes use the same rubric today. With startling results.

Not only can such a format set the tone, it also operates clinical qualification. If your prospect reads, you’re in.

Salespeople today shy away from such an aesthetic. To mangle Oscar Wilde’s quip, a shorter ‘sell’ takes longer to write. And contrary to first appearances, this type of doc is a cunningly succinct iteration of eventual Prop.

You will no doubt be providing different styles of papers throughout your bid. So it also pays to mix them up to show your class and mark you as a desirable supplier (partner).

I also applaud the need to serve quality. You cannot waffle, pad or fluff your message. Each sentence must make its sharp point.

Closer inspection. Let’s start with the strapline. As viewed up top with my pic, the salvo is clear.

What is the title of your project? His uses a couple of key adjectives; new & reformed. No superlatives. No jargon. With most interesting deployment of “settlement“, instead of the typical ‘relationship’ or ‘re-negotiation’.

Moving on to structure. The scene set during page one, the set up for the meat delivered after one line, atop page two; “Our concerns really boil down to one word; flexibility.”

Four “Proposals for reform” follow. Note once more the absence of flowery descriptions; Economic Governance, Competitiveness, Sovereignty, Immigration. Nor tempted to include companions like better-swifter-simpler-fairer.

Then that most Salesy of headers, in capitals again; NEXT STEPS.

At the last, closing remarks intended to promote the collaborative spirit and common goals. Even producing that selling sign-off staple; “I look forward to discussing this with you and colleagues in the weeks ahead”.

Now a glance at numbers. There are only three. Mention of projected population and current “unsustainable” net migration follows this; “a single digital market … could add 3 per cent to EU GDP”. Sparse. Blink, and missed. Another welcome contrarian sight.

It’s worth noting that the author has toured Europe meeting the players. So hopefully he thinks he has many of these ‘signed off’. Already on the right track to approval.

Even so, there’s many techniques here that will add power to your persuasion. 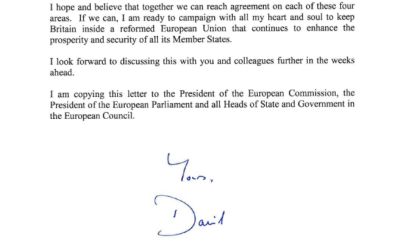