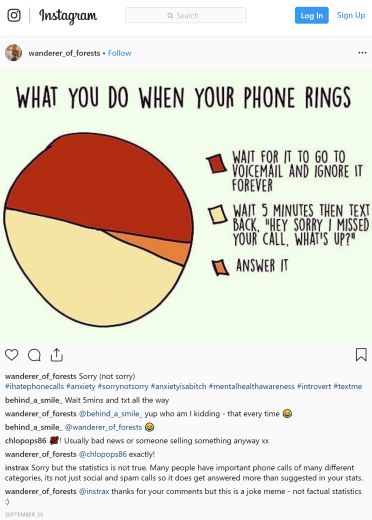 Weekend surfing I succumbed to the clickbait of It’s good to talk: Why the phone call needs to make a comeback.

Triggered from the volume of phone calls dropping for the first ever time last year in Blighty. Shrunken 1.7pc apparently.

My first thought was that if a salesperson made roughly one in fifty less calls over the year, then that may well have quite an impact on the overall number hit.

Then my own experience dawned that I was amazed this was only the first recorded fall.

A group of pre-Uni kids recently could not quite believe it when I fielded an actual phone call.

Then there’s the indisputable impact of ubiquitous call routing systems on telephone prospecting.

Yes, these have been around since the 80s. Voicemail culture took firm hold in the 90s. And the practice of letting just about every call go through for later vetting became sadly commonplace by the Noughties.

It just seems that today, in 2018, the switchboard is no longer manned and to get beyond reception – whichever of man nay machine now performs such antiquated function – you must select one of multiple departments or know the precise name of someone to reach.

I simply don’t buy the argument that LinkedIn has replaced the cold call. But that’s maybe getting off today’s point.

If you know precisely which problem for a buyer you remove, then you will get an audience when you find someone suffering said malady. Whether by email or phone. Easier said than done, yes, particularly when someone does not realise they’ve a fixable ‘problem’. But what this jokey meme piechart up top leans on, is that when only a tiny fraction of people will pick up, you need a full suite of actions and a plan for penetration that could cover many touches over quite some time.

Several sales organisations do not have such salescomms routes in place. Something that goes beyond the traditional marcomms efforts to truly nurture those whom you know ought to exhibit the discomfort you can remedy and allow them to activate a buying cycle. Thereby entering the mouth of your funnel.

Many suspects might never be prospects, but that’s no reason to not seek out colleagues. Those at the coalface beneath them, or staring out corner windows above them, or sitting in the cell alongside. Nor try finding when they last looked, or next plan to look, at something specific. Nor one of my favourites – which I must warn you, can be such a goodie some muppets put the phone down in a frazzle – what would need to change down the line to make them move (hint; you get people saying ‘nothing’ just to get rid of you, then wonder why their salespeople aren’t selling…).

A footnote on the presentation above. It projects a hand-drawn pie. Yet holds a degree of design nous, as evidenced by the full shading of the slices and legend. Nonetheless, it’s a neat reminder that you can replicate such on a whiteboard at your prospect. Cross-hatching is fine. And where a pie chart is useful, is when wanting to show a small slice up as being fragmentally tiny. Answer It…