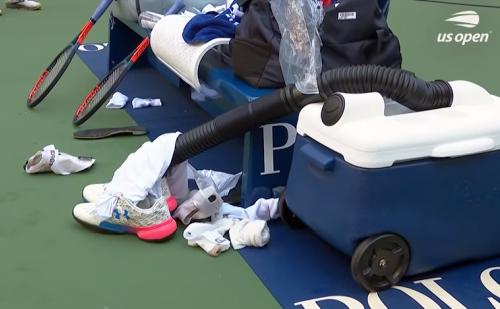 The volley delivered by Andy Murray to his support ‘team’. During his match at the 2021 tennis US Open.

Tied at the end of the second set, two hours in. His socks and trainers soaked. Expecting to have a spare pair in his kitbag.

The staff got a rocket. Insoles strewn aside, he even tried to Apollo 13 the on-court aircon to dry out his top-of-the-line pumps.

You can hear it.

One job. You had one job.

Each member of the entourage is paid to do their job.

In the case of the world-class athlete, packing their bags is one of a long list of tasks taken off their hands. Allowing the sportstar to clear their mind of the mundane and concentrate on competing.

Yet lapses can be fatal.

I remember how Major-winning golfer, Welshman Ian Woosnam, once lost out on a British Open championship. His caddy accidentally kept an extra club in his bag from the practice range. Resulting in a two-shot penalty once his final round got underway. Destroying momentum of title pursuit.

I’ve come across this in Sales all too often.

Salespeople that rock up to a client meeting without even a pen. Let alone paper. And forget having a blank order form or standard contract to hand.

Yes, there are extremes.

Yet there are specific items that simply must be in your bag.

In my days of demoing software, I carried a variety of ‘unusual’ items. From plug extension sockets to spare marker pens.

I fear that our current era migration to more remote calls may herald a slip into complacency.

Do not forget that there’s always a large amount of docs and props – many of which are better when tailored to your audience – that will benefit you hugely if produced on a virtual call.

Have you got them ready and in reach?

You don’t want to end up frustrated like this former tennis world number one.

So, what’s in your courtside bag?