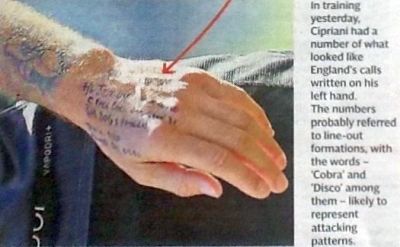 Danny Cipriani. England rugby union enigma. After being excluded from the team for ten years, his first touch back on an international field saw him create a line-break for his full back.

From sub to starter seems his route for the dead rubber in Cape Town this weekend. Recalled to face rejuvenated Springboks.

This picture of him (snapped from London’s Times print edition) from the training ground flooded sports feeds.

It shows various reminders written on the back of his hand.

Suspected to be line-out formations which precede backs moves.

As headline writers enjoyed asking, ‘do you know your disco from your cobra?‘

What struck my Sales antennae, was the visible prep.

I’ve sadly been in live prospect meetings where the salesperson rocks up and pretty much wings it.

I’m not suggesting that you scrawl on your arm like a teen cramming for an exam.

But at least give yourself a moment beforehand to make a note or three.

Even the very best presenters can use cue cards. The finest actors have prompters. The world’s most lauded visionaries use speech memory aids.

So how come some salespeople think they cannot be seen to find that next blank page of their notebook and pop the odd reminder at the foot of it is beyond me.

Jot a mnemonic. Draw a diagram. List key words that are your disco cobra triggers.

It is permitted. It is not cheating. It is all part of professional selling.