A weekend brunch in England’s scenic Ribble Valley. My pleasure being the delicious “Bacon & Black Pudding Rosti served on a bed of spinach & topped with poached egg”. Alongside an extra side of – how could you not add it on – fried bread.

It wasn’t only my food that was noteworthy.

Above I’ve shown a small section of their menu. Soft drinks. In England, the fizzy of this category gets called ‘pop’.

Food dining menu engineers might well have something to say about this.

So too should solution salespeople.

There’s a fair amount of choice here. From the criminal Big Pop poisons, to juice, to diluted concentrates. And then to the ‘posh’. 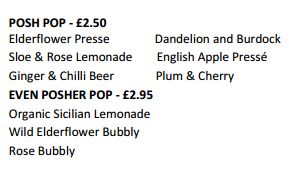 Which would you choose?

The salesteams I’ve always worked with never sell the cheapest item in their marketplace.

Here is an example from independent eating-out retail where they embrace stocking items dearer than the norm and supposed sector leader.

Not only that, but they do this double.

As soon as I saw this, I reckoned the ‘posh’ outsold the rest. It’s also a safe bet that diners bought a pleasingly large amount of ‘even posher’.

Just a couple of simple labels. Revenue and profit uplifts.

So often, solution sellers get stricken with paranoia about offering high (and specifically, higher) ticket items. I’ve never understood this.