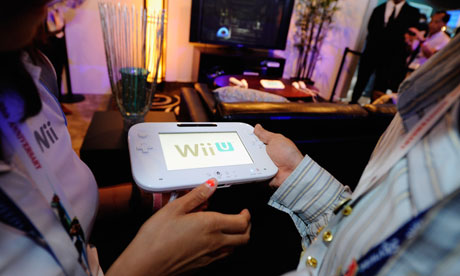 Here’s one from the world of consumer gadgetry. I just heard the Aussie head of Nintendo in the UK, David Yarnton, give an interview on his company’s new games console, the WiiU, from its USA tech show launch. (BBC Radio 5Live Drive, approx 6.45pm BST, Tue 7 June 2011)

This is clearly a big new product in its arena. Its predecessor shipped an eye-popping 86m units worldwide. So how does such a person pitch their shiny new wares? Well, let me illuminate.

After being given pretty much a free rein to eulogise, Mr Yarnton used phrases such as “I’m blown away every time our company introduces a new product“, it gives gamers a “deep, immersive experience“, and they’ve now “gone high definition“. It wasn’t an edge-of-the-seat start, lacking both specifics and impact.

This underwhelming waffle was quite rightly dismissed by the interviewer, who could have been much more derisive than merely labelling it “advertising speak”.

So he got a second chance to impress. What followed were roughly these 143 words, in 40 seconds;

The controller, it has a touch screen on it that’ll give you different displays to what people are seeing on the TV, and what I think probably one of the easiest ways to describe it is if you try to imagine back to your childhood when you used to play hide and seek and people would sort of count to ten and one person would run off and hide. Well with this new system you can do things like that because the person that’s got the remote with the screen on it has a different image to what the other players have so they can go run off and hide and the others have to try and find them without the others seeing. Sounds a bit complicated but it does bring a sort of fun and that for people back into that area.

I held my head in my hands.

I’m not a gamer. My days of such time-thief entertainment are deliberately avoided these days. I do though, own a Wii. I played archery once with my pal Henry (he has one too and considers himself a ‘pro’ although I almost beat him) and the Ashes kept my interest no longer than the first over after I clobbered Brett Lee for four sixes when playing with a friend who recently sold his business for over fifty million quid.

Still, I do ‘get’ the delights of the product. You’d expect the people peddling the ‘upgrade’ to be able to truly nail the wonders of the enhanced breed. The fact that one of their top men cannot deliver a proper punch should give us hope. If even a multi-billion dollar outfit can’t smash the point home, then we can surely help ourselves to outshine our own competition.

So where does the above pitch go wrong? I’ve not seen the update in action, but I do know that the whole hide and seek thing is way off the mark. When you hear yourself say “sounds complicated, but…” after a pitch then you know you’re on your way, empty handed. Analogies are great, but this one for me just goes nowhere as it does nothing to pinpoint a breakthrough experience.

You’ve got to get across a piece of magic, yes, and the chosen sparkle in this case was clearly the controller screen (is there only one?). So why exactly is it so good? What makes it so different from how things work now? How are your feelings altered?

If he’d have asked the developers what the main point of the upgrade was, I bet he could conjure something way slicker. Better still, guinea pig alpha testers from the real world would have given golden ammo too. So why aren’t such opinions adapted and gushing forth?

I’ve got the Wii. Why would I chuck it in the bin and shell out for a Wii U? Am I even a target customer? You can address these with just two short sentences.

Finally, the delivery evoked typically endearing and blokey Aussieness in Mr Yarnton, yet it mumbled and muddled through. You absolutely must have a sharp 30 second soundbite prepared for your new product. One that doesn’t focus on a feature, nor an analogy that leaves people scratching their heads. I’d like to know why this product even exists but am, alas, none the wiser.