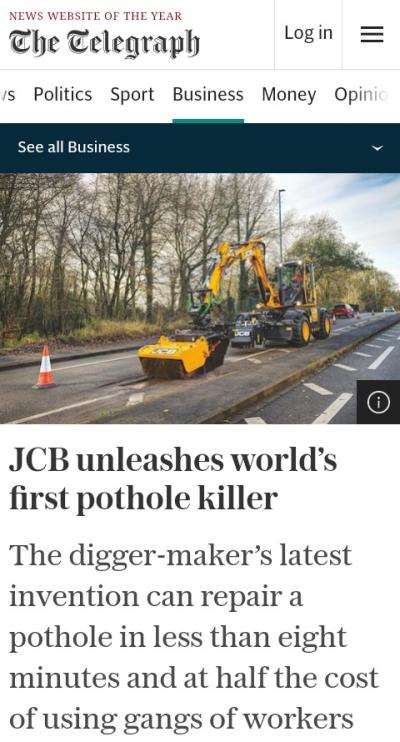 How’s this for positive launch pr?

The above is but one example of the glowing reports (sub’n req’d) accompanying the latest British construction innovation.

I see so many a new product launch flounder. And this one seems to have got off on the right foot that too few sadly manage.

Whilst many articles do not bother with mentioning the scale of the pothole problem – because it is so well-known – it is worth re-iterating the cost of crumbling roads.

Various estimates exist from time to time. All of them with huge losses put forward.

From minor road damage alone costing £2bn a year, the ‘plague’ costing motorists £5bn a year (not to mention cyclist injury) to the full pothole fixing bill costing half as much as a new nuclear power plant. Like the one proposed for Hinkley Point in England’s S West, infamous for being the entire planet’s most expensive single building project right now.

Away from the cash, top of the league of shame is the county of Cornwall. They currently report an astonishing 210,000 potholes across their roads.

Yes, the solution is apparently the shining (yellow) knight of a new machine.

Where once you needed three machines, now just one can do.

Let’s look at the figures they launch with;

“The PotholePro is a new digger-like device that the company said can fix a pothole in less than eight minutes – four times faster than existing methods and at half the cost.”

Not content with extravagant but mere manufacturer claims, they then cite a test customer;

“During trials on roads in Stoke-on-Trent, the machine completed 51 road repair jobs in 20 days, a feat that would usually have taken 63 days to complete.

What used to take a week, can now get done in just one day.

Salivating yet? But wait. How about the inevitable bad news. What does such marvel cost?

Well, as reported elsewhere, you can lease one for ‘a more affordable £600 a week’.

You can envisage the fancy cost/benefit, payback and rate of return graphs.

Let’s see how sales go. Yet for now, such figures seem highly attractive.

If your new product business case does not feel as robust, then time for a re-think?

What also strikes me about these reports, is how far we’ve come from the deafening socialist’s wails against automation. Whether Luddite, Canute’s or simply worried about their peril known as technological unemployment, in even recent days such innovation would have faced a barrage of negative press. How dare someone make something to put people out of jobs.

The Fourth Industrial Revolution framing is all about the upcoming uptick in automation-driven job market changes.