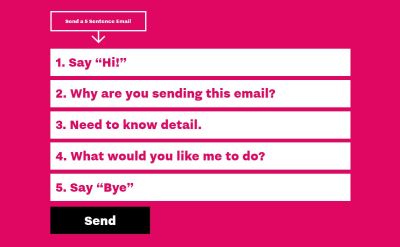 How does your email style go down with prospects?

Many years ago in the Noughties I met a guy who – a lifetime before the slack app – invented an internal email search engine delving any and all company comms. I recall him being dismissive of sending on a beautifully crafted pdf which no-one then ever reads.

Then there’s the school treating electronic and paper the same. As if the internet were never invented. Flowing prose of quill faithfully typed out in full.

So I was curious to see this recommendation of a Dutch designer (above).

Albeit how he prefers to receive enquiries, the boundaries of his 5-sentence email do build on completing the once-everywhere multi-box webform.

As his mid-2015 instagram of the concept’s germination shows, his initial enemy was the needlessly over-long: 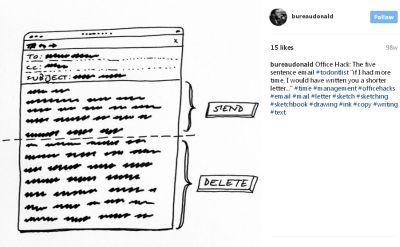 I suspect he’d heartily approve of the global economist who this week quit after a crusade against clumsily verbose emails crammed with unwarranted bankspeak.

I got into the habit of sending pics wherever I could for a long time. Later called by Duarte ‘slidedocs‘. Pretty much a solitary slide. If for nothing else, to be different from the rest of the feed scrolled through by my prospect.

These don’t tend to follow a strict template though, and are not text-biased.

There’s a bewildering array of initial email advice online for the unwary.

You can distil ‘bureaudonald’s’ five into just two lines.

For ‘why are you sending this email?’ state the issue you resolve. For ‘what would you like me to do?’ suggest that if said issue exists, then a simple conversation should ensue.