It’s not about the bid. You can write the best Proposal document. You can deliver the most “remarkable” presentation. Yet you can still lose your ‘sale’.

One particular saying made frequent appearances in the aftermath. Quoted by several participants, from a previously unsuccessful English bid leader, Alec McGivan, to the similarly empty-handed Spanish from this year’s debacle, it ran;

the fish were already sold

England’s defeated CEO, Andy Anson, was aghast that people had looked him straight in the eye and pledged their support, only to see them ultimately vote for someone else. The decision was made without any real recourse to any of the official components of the application process.

It is amazingly similar to how competitive bids in solution selling seem to run, once viewed through the self-flagellating lens of hindsight.

Let’s leave aside the well-documented and thunderous cries deriding FIFA, anywhere along the scale of incompetence to outright corruption. Even if they did rip me off for 50 Rand at the last world cup through incorrectly charged merchandise.

Apart from the obvious, namely that you should truly know precisely how your contract-awarding Board will vote before you get on your feet to speak, what can be learned from the presentations given in Zurich?

The English half-hour pitch was widely praised as a cracker. Here are five takeaways as to why it was so judged the most impressive.

Legacy – They clearly knew what they wanted their bid to achieve for the common good. The innovative Football United philanthropy was unique, Football hosts Football similarly eye-catching.

Imagery – There were stunning visuals. Yes, the three videos will linger in the memory, but photo after photo appeared with beautifully shot pics of youngsters having fun, superb stadia and footballers. There were hardly any words on them at all. “Spectacular Festival” being perhaps the one solitary phrase, and there was even this cheeky shot of Nelson, all the way up above Trafalgar Square, wearing the bid scarf in support. 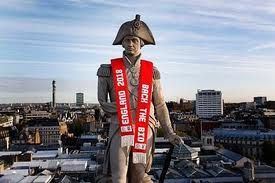 Message – I did like the sign-off. A number of statements summarised the high points, each beginning “Our dream is…” They were all selfless, from the perspective of benefiting parties.

Team – How often do you get your absolute top people presenting for your cause? The big guns were certainly wheeled out here. Interesting to note that rehearsal must have been intense, as perhaps three of the five were in no way professional speakers, yet performed with aplomb.

Coal-Face – Perhaps the single biggest piece of brilliance. Eddie Afekafe was the star. A young man saved from a life of gangs and prison by football induced tears in the eyes. As compére, he linked the whole show together by beautifully telling his story of redemption through community work. He included this terrific call to arms,

“Mr President, I’m just one story. Choose England today, and England will deliver many more stories like mine through Football United.”

Finally, what of winner Russia’s slides? (The Guardian provide a 90sec summary video). Well, there was one stunner. A real pointer in how to highlight a key sway issue your way. They felt it was ‘their turn’. They thought this should be a chief consideration. Here’s how they got that across graphically. 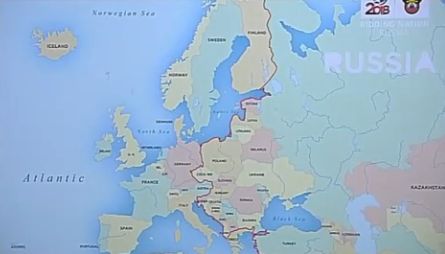 It’s a map of Europe. Not a particularly inspiring one. But they didn’t need to do much fancy design, did they, what with the bid already in the bag. So a quick scan from a basic school text book will suffice. And it’s nice to know where the Norwegian Sea is. But wait, what’s that squiggly red line down the middle? Some kind of Berlin Wall?

Yes. Look what’s gone on to the West of it. 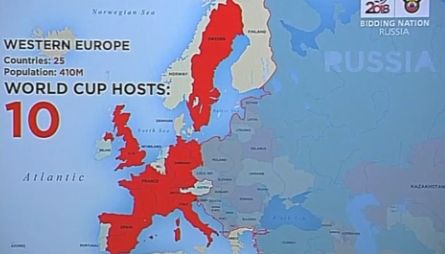 Can you guess what’s coming next…? 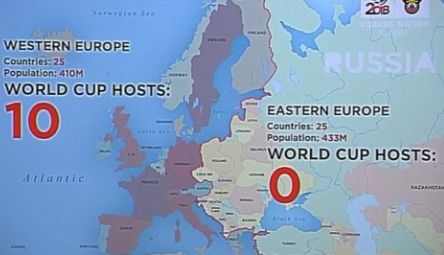 What’s more, this is apparently exactly the same trick that Rio used to help secure the Olympics for 2016.

Pick the (fish) bones out of that.