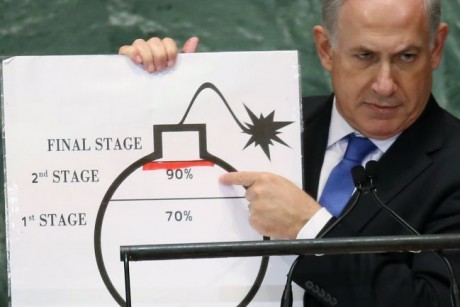 “If these are the facts — and they are —
then where should a red line be drawn?
A red line should be drawn right here.”

…and with that the talker got out a huge marker pen, and drew the big thick red line for all to see. Great theatre, great execution.

Headlines zoomed all over the globe with this single image. It was of a political leader holding up a child-like drawing whilst delivering a UN speech. Here’s how Business Week began its report:

When Israeli Prime Minister Benjamin Netanyahu held up a cartoon-like drawing of a bomb during his speech at the U.N., he set off an explosion of jokes and mockery — but it also got plenty of attention.

I came across this with Skynews on in the background whilst working away. Their foreign affairs editor, Tim Marshall, a man much better at current analysis than crystal ball gazing, described it as a Rolf Harris moment (‘can you guess what it is yet?!’). The actual drawing he likened to something that would be handed to Wild E Coyote before falling off a cliff. The message though, he suggested was to turn America’s public towards positive backing for a possible 30-day carpet bombing campaign on Tehran’s nuclear bomb factory capabilities.  (To précis, Iran is killing US troops in Iraq, helping to kill them in Afghanistan and funding general terror against America, so prepare to do something big about it).

The Isreali  further posited that he would be a huge figure of ridicule. Some tremendous parodoies emerged within minutes, and of course, lampoonist extraordinaire John Stewart couldn’t resist suggesting his solution to negate the threat; 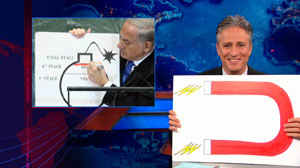 Also, he was bound to face much derision. Mainly from ‘clever newspaper columnists’. But Marshall reckoned they’d miss the point. And he is spot on. That’s because political analysts do not know how things get sold. Whereas Nethanyahu clearly has some inkling.

As the Business Week posting linked to above continues, the ‘bibi bomb’ (derived from the PM’s nickname) even got its own hashtag. As for impact?

“Today everyone is talking about it.”

The message was not a science lesson in how much enriched uranium is required to birth a nuke, but in softening attitudes towards a military strike. And now the whole world knows it.

I often tell solution salespeople that one trait that I see the big hitters have that the also-rans do not, is the ability to draw out ideas at the drop of a hat.

This so-called cartoon is a great example of that. If you have simple, school-crayon style scribbles that can get points across then you are on the road to being an total winner.

Where are your Bibi Bombs?