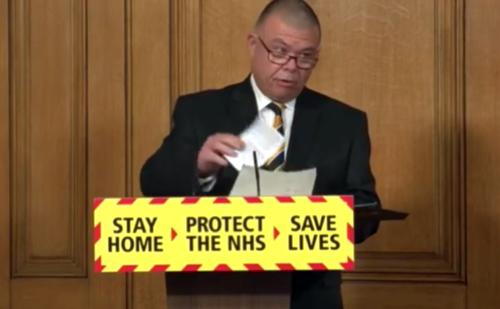 This man has become a bit of a cult figure during the coronavirus pandemic.

Earning the nickname JVT from his initials; Jonathan Van-Tam.

He is a professor and also currently England’s Deputy Chief Medical Officer.

This snapshot above came from the daily UK government press conference of 17 March.

The background is that the European vaccine drive is an utter shambles.

On the same day a Westminster parliamentary committee heard from a central player at the time of inception, that the EU roll-out plan was “always doomed to fail”. Leading the UK to forge their own path. And what a rip-roaring success it has been. As it stands now, the UK has vaccinated over 40 percent of adults with at least their first round. Europe languishing far behind at around a pitiful 10.

To such an extent, that flailing euro-leaders have joined the anti-vaxxer brigade regarding this particular inoculation. Contrary to all the detailed data from around 20million doses administered (‘you’re at least three times more likely to die from a meteorite than the AstraZeneca jab’). Suspending use of said life-saver.

To underline this insanity, JVT took out the leaflet known as the medication package insert from a box of paracetamol.

He read out the side effects listed.

If you heard them, you’d wonder if you ought ever take such a pill ever again.

His point being that the focus on alleged blood clots (around twenty out of all those millions and less than for the Pfizer flavour) were unfounded, misleading and unnecessarily scaremongering.

His set-up line was a corker too;

The ability to use the sheet as a prop worked so well.

An act guaranteed to see the snippet used across the top of news bulletins for 24hrs.

When we present (in-person, even behind a podium like here, or when zooming) there is often many a point that can lend itself to such memorable treatment.

Why simply summarise something from memory when you can use the authority from an official printed sheet?

Competitors lay traps. As in this case, ‘opponents’ spread fake news. A wrong misperception must be nipped in the bud and not allowed to fester.

Take a moment to find a part of your rebuttal that can manifest itself in physical form.

A book, magazine, packaging, manual or even printout/tablet-hosted page from the web.

Then read the killer passage.

And like JVT, you can then own the issue. Your way.