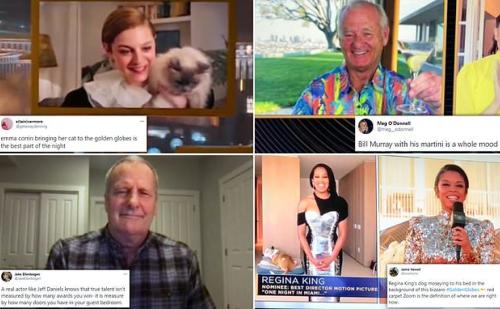 Hollywood awards season began this weekend. Which gave us mere mortals who don’t inhabit LaLaLand the chance to peer behind the curtain somewhat.

The luminaries, suitably togged up, appeared not in the traditional ceremony auditorium, but (supposedly) from their homes. 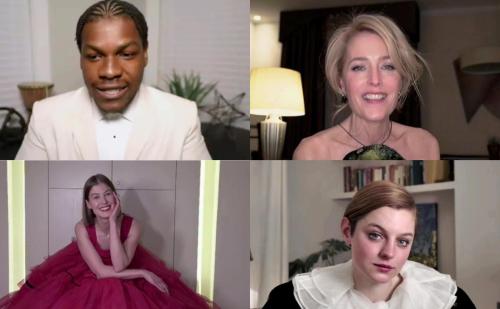 What was striking, as can be peeked from the composite quartet of winners above, is the relative mundanity of it all as deliberately projected by the glamour set.

Yet you can be sure that each space was intensely curated. No self-respecting agent surely allowing their charge to go without the set-dressing expertise abundant around their trade.

Watch just the first 3secs of this clip;

It's been a historic night for Emma Corrin at the #GoldenGlobes! She won the award tonight for Best Performance by an Actress in a Television Series – Drama, after receiving her very first nomination in the category. pic.twitter.com/y1GzyLsdXC

Likewise, only the first ten of this one too;

Rosamund Pike’s gorgeous gown is almost as big as her charm! We interviewed her after her #GoldenGlobes win for Best Performance by an Actress in a Motion Picture – Musical or Comedy! pic.twitter.com/7ZUZYcK1cU

Helpers to grab your drink and reposition your chair.

When some begin to emerge from office exile, hybrid meetings I suspect will feature many a shared screen as well as having colleagues on hand behind the webcam to help with all manner of props too. From visual aids to different flipcharts and product componentry.

As a valuable aside here, if you’re working for a company that will continue to have an office, then are there plans to create a dedicated zoom room? There should be….

More evidence of less overtly complex surrounds from those normally behind the lens. The five best drama movie director nominees. As the winner here speaks, bottom-right.

Your background can evolve. You needn’t keep chopping away at displayed paraphernalia, nor changing each room on a daily rotation.

And can the night be compete without at least one screen superstar going full on nonchalance? Al Pacino suggests not;

And there was also a winner in an actual home office. Although what dark time of the night it must have been for the The Crown creator Peter Morgan, accepting the best tv series gong eight hours ahead of California is a quite frightening thought.

Congratulations to The Crown for winning Best Television Series, Drama at the #GoldenGlobes. pic.twitter.com/KTLpn2pCpu

Plenty of cupboard door/wall real estate to play with there.

A few decent steers come out of these for us regular folk trying to persuade someone on our own video calls.

Perhaps foremost is, as I always say, you can get a touch too hung up on your background.

At the other extreme, you must give it at least some attention though.

Even the commonly deployed ‘sitting room’ pose for Golden Globers can be useful once in a while for us.

Especially if we can sit laptop on sofa arm or or higher-than-coffee-table/counter corner.

A one-on-one call, or maybe three-person one, of lower formality or single issue can suit well the occasional change up this way.

Very few were over-cultivated though. Possibly to avoid distracting viewers from the primary focus.

We can show bookshelves more rustic, ramshackle and random than Emma Corrin’s.

We don’t need to craft a special zone in our homes like at Rosamund Pike’s studio.

But we can for sure go a little more revealing than A-Lister Al.