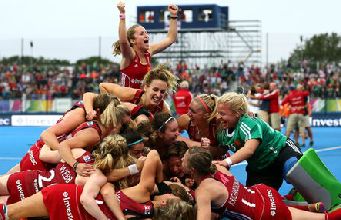 England’s ladies hockey side won the Euros over the bank holiday weekend.

Beating favourites, the Olympic and World champion Dutch in a penalty shoot-out.

In the glow of victory, I caught the star goalie speak. She made a string of fine saves during the match, then kept out three penalties.

Maddie Hinch is considered the best in the world at saving these. (Not in this case the flicks of Sean Kerly and Ian Taylor Team GB Olympic Gold fame, but where the striker runs with the ball in a one-on-one with the keeper).

She is a self-confessed geek when it comes to doing her homework. She delivers a key selling line describing how she studies her opponent;

To get past Maddie you’ll either need amazing pinpoint execution, or done more than one way previously.

It is often considered impossible to replicate the heat of the crucial game moment in training.

Techniques such as dress rehearsal and visualisation help.

The ability to know that when pressure exists, you can take trusted prepared actions that will set you apart.

This is especially so in Sales. In many scenarios. For instance, often it is not the Final Board presentation where we clinch the deal. It is in the setting of it up. There’s a key conversation beforehand that makes the close possible.

When the pressure’s on during that phone call or meeting, you’ll best be advised to have a definite fall back. And then at least one more fully prepared. How much does that sound like your selling environment?