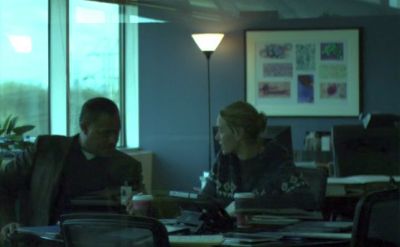 With the latest super-virus threatening to decimate humanity hailing from central China’s Wuhan, the world’s apparently been busy re-watching a film from a decade earlier; Contagion. coronavirus

A troop of Hollywood A-Listers battle against the outcomes after [spoiler alert:] a bat disturbed from its tree being felled by a bulldozer, next rests on a high-up bunch of bananas, taking its cube of fruitiness gnawed to an eave of a piggery, where it drops said morsel for a pig below to immediately snaffle it up, which then rubs in squashed proximity to a piglet, shortly sold to a butcher to end up being prepared by a Macau casino chef who doesn’t wash his hands before greeting happy punter Gwyneth Paltrow.

Millions die. Order turns chaos. The race is on to find a cure.

There’s a trio of solution selling pointers in this hundred minutes of entertainment.

Just prior the 15′ mark, as shown with the office shot above, two of the lead scientists prepare for battle;

We’re isolating the sick and quarantining those who we believe were exposed.

We ought have such ‘single overriding communications objective’ on each deal.

We are helpfully informed around 19mins in by whiteboarding about the importance of epidemiology spread; 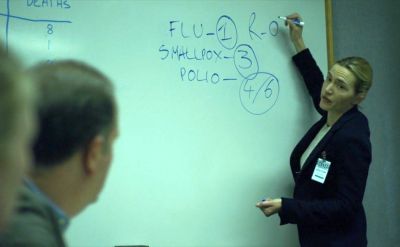 “What we need to determine is this: For every person who gets sick how many other people are they likely to infect? So for seasonal flu, that’s usually about one. Smallpox, on the other hand, it’s over three. Now, before we had a vaccine polio spread at a rate between four and six. Now, we call that number the R-nought. R stands for the reproductive rate of the virus.”

We’re then told this depends upon many factors; incubation period, how long a person is contagious, susceptibility.

When the virus later mutates around Durban;

With the new mutation we are predicting an R-nought of no less than four. And without a vaccine, we can anticipate that approximately one in 12 people on the planet will contract the disease.

A mortality rate between 25 and 30 per cent spells out the scale.

Incidentally, as I blog here, the Wuhan Virus was thought to have an R-0 between 2 & 3.

Solution sellers find ourselves often mulling over what happens inside our prospect organisation when we’re not there. Who is talking to who? What are they saying? How many are they saying it to?

Another albeit fictional filing into the perseverance trope. (On which I last blogged late-2018 and is a corporate selling and business founder staple). The eventual vaccine took fifty-seven tries before keeping a lab monkey alive. 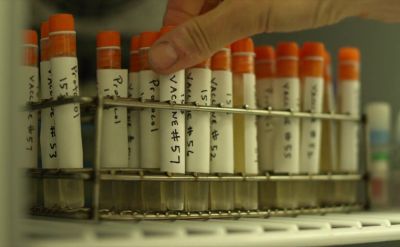