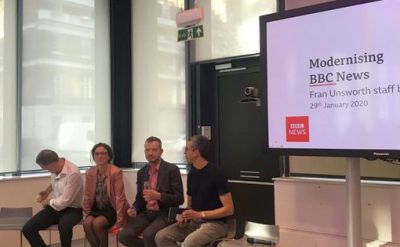 The British web couldn’t get enough of this week’s meeting announcing swathes of job losses at the news division of tax funded broadcaster, BBC.

Through this, I was also intrigued to learn of their original mission, “happier homes, broader culture and truer citizenship”, which is nowadays replaced by the vacuous, “inform, educate and entertain”.

Pics appearing on feeds included the one above. With captions variously reporting what the Head of Internal Comms (really…) shockingly said by way of intro; “enjoy and relax”. (Note too what the Daily Mail refer to as ‘the BBC bar stool firing squad’.)

As title slides go, Modernising as your action feels rather un-modern. And not just by the odd year either.

It perhaps reveals more about those swinging the £80m axe than they realise.

To modernise feels not only generic but also pretty lame too. Be thankful I suppose that the three-hundred-and-forty-grand-a-year public-funded boss didn’t instead use Transforming. Still, the question remains, what business ever not thinks it ought be modernising?

“We have to adapt. We need to create a modern newsroom that is built for the future and not for the past.”

Switch newsroom for organisation and you’ve a catch-all quote. [For a separate thought-experiment, then try swap newsroom for salesroom…]

As a choice of verb to spin the mode of change, corporate corridors have had plenty over the decades. From computerising through re-engineering to latter-day disrupting and digitalising. B2B sellers have long needed to keep pace with such trends.

If there’s one verb that sums up the progress you aim to unleash on your current rounds of bid, then what would it be? Please though, don’t say you’re modernising.

As a footnote, one of the slides in the body of the presentation also whizzed around the web. A concentric circles diagram (which evolves to be enclosed in a final outer red circular layer relating to ‘audiences’ & ‘audience data & insights’). But with an exclamatory twist… 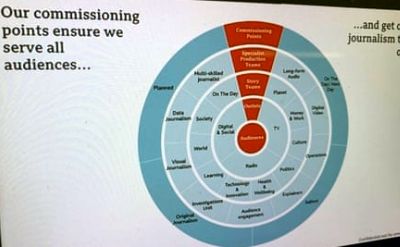