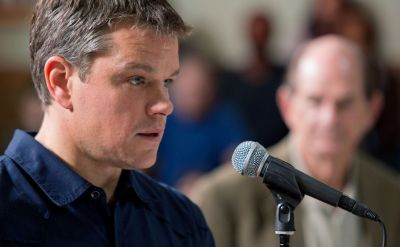 Movie Promised Land (2012). It opens with Steve Butler (Matt Damon) chatting at a posh dinner with a senior exec at their “9 billion dollar company”. Steve sells fracking. He pitches land rights for drilling from rural small town holders. Lots of it.

His boss is impressed;

You guys have closed more towns than the team behind you by almost triple digits.
But the price point that we pay out on your leases is half of everyone else’s.

Steve puts his stellar sales down to him being from the same stock as his prospects. Backwater good guy just wanting to do what’s right.

I’m not selling them Natural Gas.
I’m selling the only way they have to get back.

The first pitch we see from the field, the door-to-door duo split. The husband gets the get-rich-quick pitch from Steve, “You could be a millionaire”. The wife, a more emotional play on better schooling for her youngster, from Steve’s partner, Sue, “Getting education that allows him to compete on the highest level”.

Next, a sharp exchange, sees the local mayor seem to think he can blackmail Steve. He makes like he can sway the town against him. And mocks a resulting backhander. Steve is calm, but brutal.

Mr. Richards, I’m-I’m just being straight with you, it’s simple math.
Best case scenario there’s 30 million dollars under your town.
.1% of that is 30,000 dollars, that’s what I’m authorized to offer you.
I’m also telling you it’s a one time offer.
Don’t get up.
Don’t do that.
I’ve been at this table before and it doesn’t end well.
Look, I don’t fault you for trying.
But, I’m telling you don’t do this.
Because we will walk away.
We always do.
And after every single town within 3 states has signed up for this, and the blows of this economy are almost unbearable, we’re gonna come back.
And we’re gonna offer you nothing.
We will offer this town nothing.
Every contract we’ve signed, every piece of the pie we’ve offered, it all goes away.
And we buy this place for nothing.
Now please.
Let some other guy be last.

You cannot advocate a bung. Never. Nor can you consider playing a bullying power card of your own.

What you can take though, is how to frame the dangers of holding out to your prospects. To stick with the status quo means losing. Big time. To suggest brinkmanship seeking a bigger discount will jeopardise the smoothness of delivery. To ignore the scale and scope of your impact and the urgency with which it is required hands initiative to your prospect’s competition.

Seriously hungover, Steve decides to engage with a dissenter at a pivotal Town Hall meeting. He starts off well. Getting onside those who fear anything ‘new’;

Perfect?
Of course not, uhm.
But given the government regulations that we have to adhere to and all the hoops we jump through, it’s pretty close to perfect.
The only reason why natural gas is so big right now is because it finally is the clean alternative to these dangerous industries like coal and oil.

A stench hanging in the air, the exchange ends. Progress uncertain. Limbo creates angst. Energy saps, the bid less likely. His colleague Sue rips into him. (“Don’t tell me to calm down! ‘Natural gas isn’t perfect’. What were you thinking?”).

Steve, proven empathetic nous, lost control because he was bleary-eyed “yeah, but”. When he should have been considered and focused. He could have exposed all doubts as overcome and outweighed. He got beaten in a passive-aggressive confrontation.

A definite lesson for passionate believers in their wares.

Drinking alone in a bar, Steve is down. He is losing. Not enough Sales. Angry residents holding out confront him. One demands to know, “what it is that I don’t get”?

Money.
Money.
And I’m not talking about little pay increases.
I’m talking about Fuck You money.
You don’t wanna apply for college loans for your kid?
This money says Fuck You, loans.
You worried about car payments?
Fuck You, payments.
The bank’s gonna come and foreclose on your family farm?
Fuck You, bank.
Fuck You money is the ultimate liberator.
And underneath your town is Fuck You money.
So think long and hard about all those brutal days workin’.
And the goddamn checks you get from whatever frozen peas company’s buying.
Think about how much you made on your best day, and then you think real hard about how much you made on your worst.
Cuz let’s be real honest with each other, they’re all looking like that more and more nowadays, right?
These people? This town? This life?
It is dying or damn near dead.
And you all see it coming, and you just don’t get the fuck out of the way.
Why? Why?
Pride? Of what?
What have you got?
Shit, how much of it is even yours?
I bet all four of you are getting subsidy checks from the government. Right?
Now, when they stop comin’,
When all that help stops comin’, and you’ve got nowhere to go, you’re gonna remember this conversation, and remember the guy who came in and looked you in the eye, and said Fuck You.
[Steve gets punched in the nose]

It’s rarely, if ever, only about the pull of money, Steve. Especially not when forced down someone’s throat.