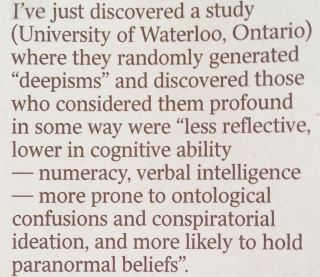 A snippet I pic’d from Thursday’s Times print edition.

Closely followed by the myriad personality flaws of those that consider them worthy.

Hat-tip journalist Deborah Ross for alerting the Sales world to this failing.

What seems to have sparked her ire is the current lifestyle maxim de jour infesting feeds; “nobody says at your funeral you had an expensive sofa and great shoes, life’s about more than stuff”. Indeed, she ironically headed her musings, “you’ll be glad you spent more time at the office”. Quite.

Neither am I generally a fan of such random witticisms in a deck.

Though there are exceptions. So here’s a quickfire four.

I often try to deploy the unfinished quote trick. Where you gain audience attention and engagement by leaving a key word blank. And seek options that best fill it.

I also like to throw in a relevant comment from a respected colleague, supplier, client, or industry player. Keeping the identity secret to reveal after guesses from the floor too. I fondly recall asking a client chief exec to whisper me particular thoughts on the basis I’d anonymously highlight them for discussion around one potential project with terrific results.

There’s always the deliberate lame option. I once purposely popped up the annoying saying of a prospect Manager, knowingly aping David Brent. I was glad it got the groan it deserved, then a lovely little riff by the audience on what could be better. (Beware the sense of humour bypass possibility here though.) Then another time I put up something cleaved from the press from an interview with a key competitor. Vacuous, meaningless waffle, which duly did its trick in my deck.

And fourthly, the completely made-up one. You can write in the style of someone nearby. You can take a hugely well known sentence and swap in your prospect’s favourite word of the time. You can rewrite another with various words struck out, replaced with your client’s specific lingo. Or adapt famous slogans in a similar fashion.