So England crash out of yet another tournament. Hardly can it ever have been more humiliating. Well done, Iceland. As one former player quipped, the world’s most highly paid team were beaten by “a country with more volcanoes than professional footballers”. Who, lest we forget, are a team “managed by a dentist”.

In time honoured journalistic fashion, let me employ the ‘5 things we learned’ theme. What can selling take from this embarrassing disgrace?

A striker that’s been there before vented across the media in the aftermath. Alan Shearer was indignant that he’d “never ever been asked” for his help. This included on how he prepared, trained, dealt with pressure and (incredibly) approached the penalty shootout. “Criminal”.

Salespeople in my experience aren’t great at listening to those that have been there and got the t-shirt. Perhaps that does not make them unique.

After all, there’s many a chief exec claiming to have once owned a quota who’s views on selling are genuinely outdated. If for no other reason than the passage of time.

Yet what about those that are acknowledged to be at the top of their game now? Suppliers, Clients, Partners. Surely they’d see the win-win from a sharing session?

A wonderful phrase. To park the bus is to defend deep for the entire 90mins and drain the opposition of attacking energy. Hopefully sneaking a winner on the lone counter. The French for this colloquialism is to ‘shut up shop’ (fermer la boutique), Italians refer to ‘door-bolt’ defending (catenaccio).

In any case, England knew that as the supposedly considerably weaker side, this is what Iceland would do. We were even told we’d practiced how to break down such defending. Yet there was zero evidence of this come game time.

If you know there’s going to be a specific Sales play needed, prepare and rehearse it until it is second nature.

3 Resist Swinging to the Antithesis

We’ve been here before. Leaving aside the fact that English football’s problems are more structural, the clamour to find the new messiah and select the next incumbent for The Impossible Job begins.

Each time one occupant fails, we knee-jerk to the polar opposite for the next.

Unproven, headstrong and a native becomes foreign, sophisticated and glacial. Later replaced by inexperienced and chummy and home-groomed. Then, proven winner, disciplinarian and foreign (again). And so it circles. Giddyingly.

4 Put Players in their Right Positions

I could not believe it when I realised that the chosen forward line for the crucial match had never before played together. And this was a theme throughout. Only one single player picked in the roles for which they’ve become club stars. And even he wasn’t the best first choice.

Do you have someone dealing with majors better suited to independent accounts? A chief exec engager more comfortable with techies? A farmer forced to be hunter?

One quote following the ignominy was that the boss ‘doesn’t know whether he wants tea or coffee in the morning’. The metaphor suggesting that his indecision permeated through the players. Last minute changes that surprise rarely work. Do you confuse scrambled thinking with innovative experimentation?

Over-simplification is as bad as complication. Many analysts hail the work of coaches that deliberately reduce and run-through relentlessly the number set moves. In part to lessen the thinking burden. Consciously seeking the perfect balance.

Although the majority of salespeople may come across less keen to be coached, I still believe management should strive to do so. I was appalled to read Matthew Syed’s experience of a leading youth academy coach tell him, “you can’t coach people to use the ‘wrong’ foot, they either have it or they don’t” I myself (and my father for that matter) are living proof that this game-changing skill can be coached. Salespeople aren’t necessarily “born”.

Don’t search in vain for the next magic potion to arrest serial failure. If you feel you’re hovering on the hinge of history, then paint a plan, and stick to it.

Feed the monkey, and it will score.

footnote: good presentation ideas can flow from this tackl stat treatment of the match itself; 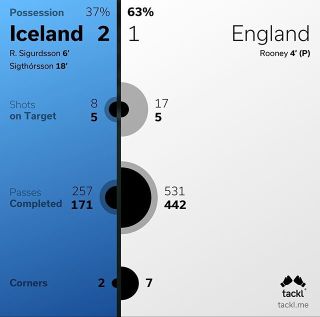