I have very little time for weather forecasters. And the ones English licence-fee payers must put up with are surely the planet’s very worst.

Yes there are the well-known howlers throughout BBC provider Met Office’s 154-year operation.

That 1987 hurricane denial. A classic.

Much more recently there’s been two Summer horrors. A much heralded bbq Summer, washed out. Then the wettest Summer since 1766 completely missed in 2009.

At the other end of the thermometer, the coldest November Polar plume a mere afterthought. This year’s early floods wrongly forecast as “less precipitation” January.

Then there’s all the days of cricket lost when no hint of stormclouds featured the day before.

It is these ilk that give all forecasters a bad name.

More mystifying still, there’s zero accountability. Who cares if yesterday’s tea-leaves-reading was out? Until now.

Finally, someone else gets to have a go. For the firm that have held the contract to inform a nation of their need for brollies for a criminal 93 years has not made the renewal shortlist.

The vanquished supplier, the 1,800 employee strong Met Office, roughly a tenth of turnover gone at a stroke, wield all manner of supporters and employees in hardened denial. “An end of an era”, they sob. Thank heavens for that, the public sigh.

They claim they have been global innovators. I’ve never heard such rubbish. Pop onto just about any other nation’s telly and you see all sorts of better presentation than the Beeb’s Met Office display.

If only I were in charge.

I realise a global weather crossroads is tricky to second guess. Not being able to state with certainty that tomorrow will be scorchio. Yet peddling opinion as fact in their manner deeply grates. And just to prove you can make figures mean anything, they claim a 91% accuracy for the next day’s temperature. Which you’d get if you simply used this day from last year. As for the general “basket”, that’s “sunshine, rainfall, temperatures”, then even their official spokeswoman claims only “aroundabout” 80% accuracy. Apparently, the atmosphere is “chaotic” and “really complicated”.

So behind the game must they be that their new £97m supercomputer is money down the drain.

This tale has a couple of weathervane Sales readings. Both for incumbent account management and a new supplier usurper.

Chief among these is your ability to spot a change in the wind.

The ‘client’ here is a corporation keen to show its sense of moving with the times. Focusing on better delivery at sharper cost-effectiveness, to impress those to whom it reports.

Then there’s the initial foothold. The previous 2010 tender’s runner-up managed to achieve the ‘consolation’ of providing an element of the service; the graphics. This ‘in’ gets them on today’s final two shortlist.

Then there’s the perceived pricing. One commentator (and weatherman himself, John Ketley) made a key observation: The Met Office have kept increasing prices every year, and just expected the contract.

An important function – feature almost – assumed heavy significance. Fears that a decent phone app could not be produced (despite the client/Beeb having their own) questioned technical capabilities.

Finally, overall perception also played a vital role. There were rows between the “partners” over dumbing down of broadcasts. (Unbelievably the ‘client’ resists using probabilities like the rest of the world). When the current trend for “challenging” crosses the line into criticism and conflict you know there’s only one outcome.

“Britain’s weather is less predictable, as our forecasters constantly remind us by failing to predict it”.

How does you your major account defence/attack score on them?

Which tempts me to modify the cheeky wisdom “there is no such thing as bad weather, only bad clothing”.

“There’s no such thing as a bad forecast, only bad qualification”. 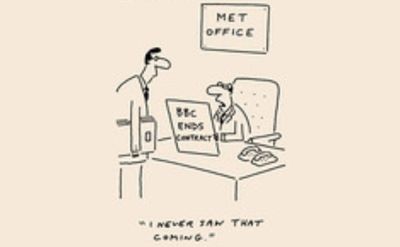