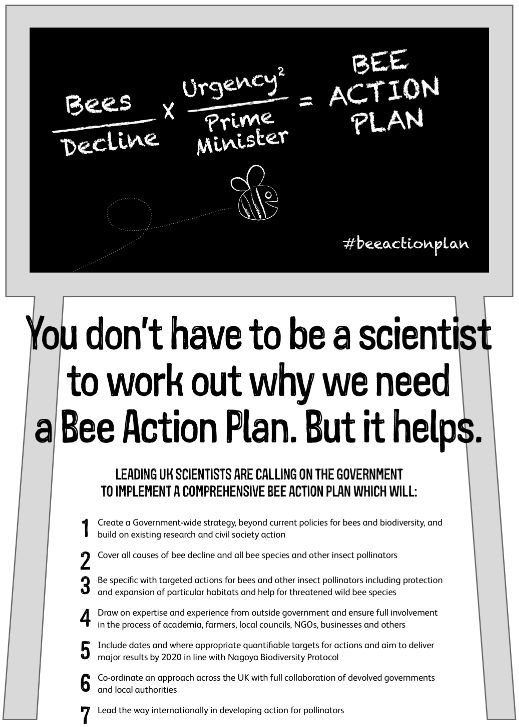 I have such affection for the humble honey bee. The joy of my adulthood rediscovery of honey came when involved in a wonderful project to farm and sell organic honey across Africa.

So I am well versed in the plight of the poor creatures. Colony collapse disorder, varroa mites and American foulbrood are among the many perils decimating them.

Another appears to be the inability of the scientific community to adequately gather souls to their cause.

The Bee Cause garnered decent press this month in England. And supporters even placed the big ad above in the nationals.

It left me so downhearted.

Where do I start? How about with the name. The Bee Action Plan. Action Plan. It’s so generic. Councils make action plans to tackle the problem of potholes in roads. This is way more important than that mundanity.

The Bee Cause is a good name, so why not stick with that throughout? Lessen the dilution. If you really must create more ways of ‘branding’, then adopt Save The Whale thinking. How about Free The Bee? I’m sure those that conjure straps up for a living could riff on this with terrific results.

Next, we see the blackboard chalkings up top. Leaving aside the fact that anyone under 40 may not recognise something so old-school, what’s with that equation? My instant reaction to it was positive. I do like to frame ideas in that exact same way. (Especially using the ≠ sign).

Yet in this case, I found myself re-reading it time and again. I think I get it now, but I can’t help feeling that it’s not quite right.

When you divide something you reduce it, so decline does reduce bees. But surely you don’t want the PM reducing urgency? Perhaps I’m being pedantic. After all, to swap in say, Apathy may not be the vibe required. And why single out for use the PM anyway? UK Govt, Parliament, Great British Resolve, Lawmakers… any of these better? And if you want to make it personal, shouldn’t it rather be David Cameron anyway?

In any case, this ‘equation’ treatment is a neat idea for a presentation slide. Particularly useful for workshop-framing of a problem you’re resolving. Which can lead to the solution. I can also picture technically-orientated buyers loving riffing their own of these too. And in a way that’ll certainly help set you apart.

Then we get to the seven bullets. Whoa. This is shocking. They are impenetrable.

It reads like something a Brussels Eurocrat would write explaining why chocolate must now only be called Vegetable Extract Confection (2013) Brown. Or why sovereign countries no longer need control over their own affairs. Ahem.

The list is full of intricacies. I strongly fancy that Red Tape language begets red tape responses. What’s needed is a clear set of doables, not confusables.

When crafting this kind of pitch, imagine yourself leading a chant of supporters on a rally. You know the kind of thing. When the chorus leader shouts;

What do we want?

To which the assembled throng eagerly reply with a snappy word or two summing up their demand. (Here’s another germ of an idea;)

Which the single voice follows with

When do we want it?

The answer being simply,

There’s no way you can do this with the scientists’ bullets. 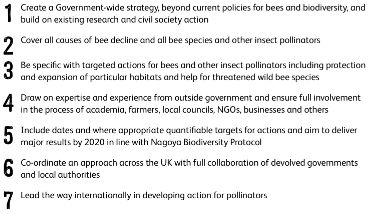 Which is such a shame.

I realise that they’re after specific action, but these still strike me as a waste of time.

As a final point, if you pin up a big title, then make sure it is answered by what follows.

You Don’t Have To Be A Scientist To Work Out Why We Need A Bee Action Plan. But It Helps leads me to believe that what I hear next will tell me all I need to know, in layman’s language, about problems bees face.

Yet it patently does not.

Several lessons here for your clarion call to a your newly cultivated current hot prospect.