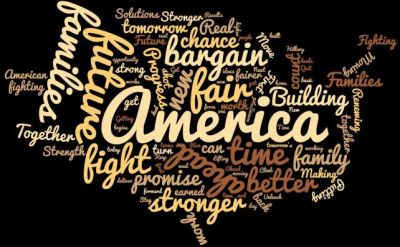 Victorious Trump, you may recall, only ever had one; Make America Great Again.

As I blog this, we’re only a fortnight into The Donald’s presidency, yet the world seems in a spin. Or should you make that rather, ‘solely the metropolitan liberal elite and/or snowflake slither of the world’ that is in a tizz?

Just the man for the shake-up the global order needs, or the inevitable igniter of WW3?

Whichever side you’re on (and surely there can hardly be a single human being on the fence with this), he does have a knack for the snappy slogan. As his often dead-of-night Decree By Tweet show. To the delight of a ravenous worldwide media.

In contrast, the list of Clinton the Complacent’s possible campaign mantras is bewildering. They’re also pretty much rubbish.

Yet that isn’t my main complaint. After all, the whole point of the dreaded brainstorm session is that ‘no idea is too stupid’. You only seek to unearth that single, sparkling gem.

And it is this glistening magic that is patently missing from her list.

The compilers thought through certain “themes”.

There’s some legs in this approach. Imagine you’re on a deal. Diff’rent strokes for diff’rent folks, right? Messaging adapted for each sub-audience.

Yet you still need that stand-out, memorable rallying call for prospects to get behind.

By all means generate your own 84 on your big deal today.

But make sure there’s a diamond among them to light up your prospects.