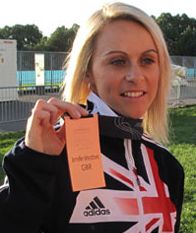 The Dutch head of UK Athletics enjoys a reputation as somewhat of a hard man. Charles van Commenee could well be the most cartoonesque one-man case study on tough man-management in world sport.

I thoroughly enjoy watching athletics meets and am exasperated that the IAAF are as useless at doing what’s right for their sport as all the other global sporting organisations. Anyway, the European Team Champs took place in Stockholm over the weekend. The reliable BBC interviewer (and former Olympic triple jump gold medalist, albeit with some bizarre personal motivations) Jonathan Edwards presided over a wonderful insight. It came courtesy of the delightful Jenny Meadows. She’d just come second in her 800 metres, earning 11 points (the winner got twelve, down to the twelfth place getting just one).

She clearly found the latest management technique deployed by her boss quite intimidating.

The night before the championship, the team got together for a formal meeting. Mr van Commenee made each individual stand up and explain to their team-mates where they were going to finish in their event. If your first answer didn’t meet with his approval, you get the distinct impression you gave away ground to him and were probably also under pressure to push your response up a notch.

With world class runners ahead of her right now (notably from Eastern Europe and of course in the shape and form of Caster Semenya) she’s gamely raising herself to try and figure among the medals in London next year.

She disclosed that she was probably expected to earn nine or ten points in this particular race. But when exposed, standing in front of the team, she plumped for eleven. “Charles seemed pleased with that”, she nervously giggled.

The inference was that she was thinking of this when actually racing to win those very same points for her second place finish.

This pledge system exists in Sales. I myself have seen it in action. This has been in oppressive environments each time(although I wouldn’t like to necessarily make the connection that it’s the only place appropriate but it should forewarn the unwary).

At internal sales meetings, salespeople are called on to stand up and pledge. They must commit to bring in a certain number or specific deals. It’s all carefully minuted. And there’s constant pressure from the boss to go larger.

I’m not an advocate of this approach at every single turn. But I do think it has a valuable place. The Athletics crew had not come across it before, so the impact was heightened. Most forecasting processes will build in some element of must-win business identifier already, and to rely on such an extra blunt instrument regularly will soon diminish its punch. In the same vein, a key selling period or year-end gee-up can well benefit from this treatment.

The issue is what do you do with the results? I’ve seen people ridiculed in public for previous pledges gone wrong. You’ve got to be very careful with the cultural ramifications of this ploy.

In the main, if used to genuinely improve forecasting and allied performance, then it’s a good thing but there’s a fine line to tread with this one. If you’re a sales manager and have never tried this, I do recommend you give it a go. Choose your moment carefully, I’d caution. And think about how you follow up on it.