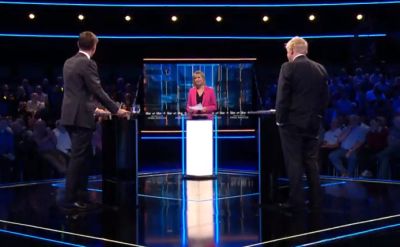 I respect his children. She’s a fighter. To change his mind. To [not] answer the question.

The last question from the audience;

What do you admire about each other?

Immediately I recalled that most recent US Presidential campaign second television debate cracker;

…name one positive thing that you respect in one another.

As a reminder, here’s how the American candidates dealt with this tricky one, after the gasps of those assembled;

Clinton: “… I think that’s a very fair and important question. Look, I respect his children…”

Overwhelming opinion from the spin room at the time was that Donald handled this better than Hillary.

In the race for Prime Minister, the mood was less tense (these pair were from the same side). For respect now read admire;

Boris Johnson: “I think – I – [comic-timing pause, generating audience mirth] I value – I greatly admire his ability to change his mind…”

Jeremy Hunt: “I really admire Boris’s ability to answer the question [said with heavy dose of sarcasm, eliciting laughter too]…”

In this instance, the lightness extended to post-match assessors. Responses here seemingly having little ‘move the needle’ impact either way in this vote. Although the former did appear viewed as the weightier hammer (given its Brexit stance dig).

This question hits us in sales too. Strangely, often at the end of a meeting as well.

There’s a theory I heard about when you encounter an entrenched mindset. Unwavering belief can be apparently softened by asking to think of three ways they would frame any appeal of an opposing view to which they don’t subscribe.

It also brings to mind formulised movements towards depolarisation.

How many times do you get asked by a prospect about your competition?

You must be prepared for it.

One theme I’ve always stood firmly behind, is never wantonly berate your competitors. This enquiry does not open such door.

In our solution selling realm, the prospect has a distinct, special and individual problem. One that exclusively we have a unique proposal for resolving the best. That ought be the focus.

Tittle-tattle is way beneath our role.

It’s also pretty easy to damn with faint praise. Or position supposed opponent strengths as inappropriate; if your prospect is big, then your competition is strong on small, kind-of-thing. Yet still…