Nigel Travis is such an underwhelming performer. It truly saddens me. He clearly has a sunny disposition. But if only he would stop being so insular and myopic and let this shine through properly.

Our Nige continues to speak only from his perspective and lack the requisite punch with his points.

Trying to pick out any morsel of best-practice from his general waffle is tricky. Compelled to try, here’s an exchange we can be party to quite often ourselves when solution selling;

QUEST: — what’s the next big thing in donuts? What is it people really want? Because, I mean, look — we’ve got a humble glazed donut which is all very nice. You’ve got the Munchkin. But what do people really want in a donut?

TRAVIS: Well I think people are actually going slightly up market in donuts. We’ve got all (inaudible) in development, we’ve got all kinds of premium donuts here in the U.S. In Germany, we’ve actually had premium donuts for some time. So, these are more enhanced donuts, they tend to be a bit bigger, a bit more exotic and we think that’s an opportunity. People like to sort of kind of price themselves up into a little bit more of exotic luxury I could describe it.

Do you know what “the next big thing” in your space is?

Prospects are inclined to ask what might be around the corner. It can be part test – do you know your onions – and part future-proof desire – who wants to not prepare for something so obvious to not do so would prove costly in some way.

Then, how do you articulate this imminent wave?

Mr Travis has a great play to make here. But he gets stuck – as he always seems to – in the wrong slant. One day, he’ll talk only from a customer’s viewpoint. I hope.

It’s not a great start to mention that people are “going slightly up market”, nor talk of “premium donuts” up front. Such phrases are instantly associated with cost. Higher cost, specifically.

But then he warms up to a winner with his use of the word “exotic”.

So, it appears punters want something a little bit more from their donuts every now and then. They like to upgrade their day. The ‘humble glazed’ is terrific, but the option for something a touch funky can really be the sprinkle of glamour, nay “luxury” your day really enjoys. (I’m reminded here of the famous Lipstick Theory too).

Nigel needs to ditch the investor speak. His choice of words, “People like to sort of kind of price themselves up” is a shocker. He must treat his appearances less like an earnings call with analysts and more like he’s wandering around one of his own stores chatting with (whisper it) real customers.

Earlier in the exchange, the firm’s strategy comes across as the classic confused ‘we’re doing everything for everything’ nonsense. He’s a man clearly unfamiliar with Ansoff’s Box. Yet when he mentions the 40 new products (I need to see them!) made last year – with a further 40 to come this – you realise he’s missed a great opportunity to anchor his pitch on this mouth-watering gift.

You’ll have one too. Use it. 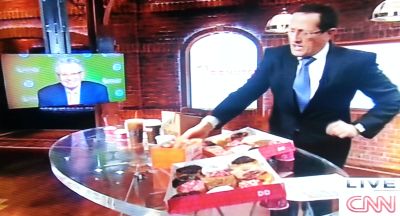