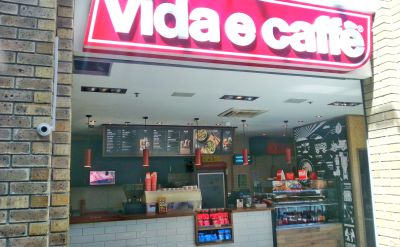 It’s a transaction nearly everyone there knows.

Once you acclimatise to the pumping bass or some of mankind’s eldest tongues being shouted loud loud or the apparent inattention of the assembled baristas, you order your drink with relief.

Only then to have a question barked at you like an instruction.

The same query. Every single time.

Haven’t we progressed from these?

It is something many a solution firm also grapples with. How to increase the so-called till-ring of a deal.

Surely a gentle question on the end of a buying talk won’t do any harm?

For proponents of gap analysis and such like, not being shy wondering whether that extra module is desired feels as inoffensive as suggesting blue pens as well as black.

But what when it is the same question? Each and every time. Regardless. Relentless.

On the day I took the above pic, the adjacent quartet of competitors all had healthy trade. In the entire fifteen minutes I timed myself there, not a single soul ventured to their counter.

They tend to be a popular destination around the Cape. Given the choice though, is there a solid link between their incessant closing and waning customer loyalty?

It makes me think.

Upsell (noting this instance is technically a link-sell) and its siblings are a vital – and acceptable – part of Sales. Yet this example may suggest how you craft your tactic is crucial. Too much in the eyes of the buyer and diminishing returns could well kick in.

In the above case, I immediately thought of several alternatives. A whole basket of ways to encourage those vaunted few cents more. Some simply alternate requests from differing forms of words. Others, mere gesture. Even (don’t tell anyone) promos.

Many a sell can utilise upsells. Knowing both when and how seems as important as ever.