Her main interviewee was concerned about the then upcoming ‘summit’ between the intelligence agents and incoming President. The sticky issue being Putin hacking the US Elections. Which to all the world seemed like an open-and-shut case. Yet another confirmation of the apt emoji used to represent the Russian despot by diplomats on whatsapp.

She picked out this juicy quote from General Michael Hayden. 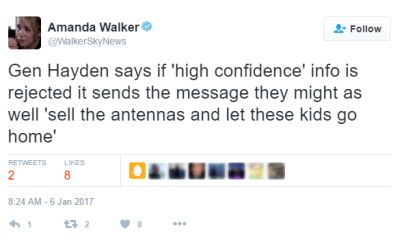 Having ran the two big global-reaching American agencies, pretty much the world outside of USA will have little time for him. But a re-assessment due perhaps?

After the suggestion that Trump will ignore those in the shadows, dismissing the clear Russian cyberwar, he dived into an impromptu role-play. Here’s his objection handle;

Mister President-Elect this is not about you, sorry.

A lot of things may be about you, this is not one of them.

This is about us.

This is about our democratic processes.

And we’ve got to be all over this.

And then when we’re done – which I think we’re getting close to now – we’re going to tell you what happened.

And I know you’re going to want to defend our democratic processes too.

I note further inferences that ‘next time they could hack you’.

The beginning seeks to set the frame.

The reference to “you” feels not solely about the ego of the doubter, but the way they see the issue; leave behind the red herring of your own electoral legitimacy.

Also rammed home before the joint pursuit of togetherness is brought in; “this is about us”.

What do ‘we’ both care deeply about? It even has its own ‘name’, repeated too; “the democratic process”. With a plan for immediate action.

And the Close. An assumptive one. You can almost imagine tagging on a comedy, “won’t you?”

All in just 20secs. Are you doing the same?