China‘s embassy in Berlin wrote me an open letter because they weren‘t too happy with our Corona coverage. I responded.
Full version: https://t.co/BH1muj2hnh pic.twitter.com/Q62H2G9ZqA

A publication that tells totalitarian China rulers how it is. Well done to the editor of Germany’s Bild. Keep up the good fight.

‘With your house burning, would you ask the arsonist for a bucket of water?’

Views surely shared by practically the entire planet. Including the American President;

It could have been stopped in China before it started and it wasn’t, and the whole world is suffering because of it. If it was a mistake, a mistake is a mistake. But if they were knowingly responsible, then there should be consequences.

First decoupling, then a reckoning, now reparations. The direction of feeling towards China’s despotic leadership from those Free is clear and hopefully building towards serious action.

Such injustices, criminality and disdain by the Beijing regime led Bild to publish a bill; What China Owes Us.

In the format of a retail receipt.

And this is just the start.

Whether from a cafe, hardware or clothes store, such paper slips hold similar look and feel.

Interestingly, fonts too are shared. Typically stuck in the dot matrix printing style of last century.

So how about making your own “rechnung”.

Rather than something to resemble an invoice (a no-no at any time) it can instead focus on the ‘bill’ racked up by your prospect’s ‘losses’ from the problem you seek to resolve. With the explicit point that you will ‘reclaim’ these. Stem them, at the very least. Releasing all that waste back into their hands.

And you can use the old school typefaces based on the chit of a favourite retailer of theirs to show it, too. 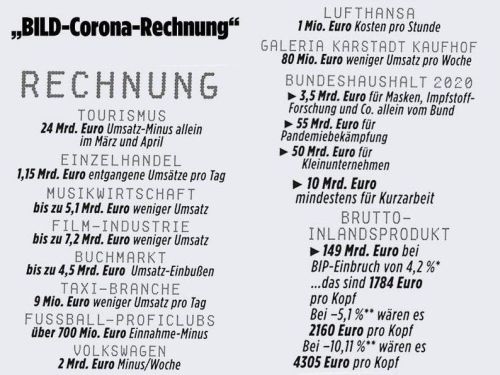