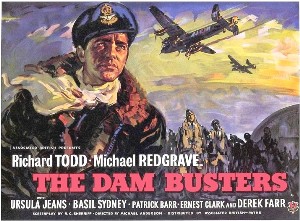 I watched this movie on a cold, damp and grey Sunday afternoon in England recently. It’s been maybe twenty years since I last saw it, and what a pleasure it was to be refreshed by its inspiration.

I sense a sadness that perhaps more people are unaware of the incredible heroism this film triumphs than ought know of it.

Maybe that’s why a big budget Peter Jackson driven remake has been mooted for some time.

In any case, brilliant inventor Barnes Wallis demonstrates three fundamentals of selling in the first half of the movie.

He’d come up with the idea for a ‘bouncing bomb’. Apparently sparked from Nelson battering the French at the Battle of the Nile a century and a half earlier, when he skimmed cannonballs across the water to reap greater damage to their ships.

When he took the idea to the top brass though, enthusiasm was absent.

Several times he was ignored in the corridors of power.

Despite having model prototype theory proven, bureaucrats in the government dismissed it as too ‘out there’. Despite compelling evidence that all their objections were invalid. Examples included that manufacturing was already producing munitions at their very limit, whereas in reality, using the bouncing bomb would mean overall less bombs would need to be made because of their increased potency.

Frustrated, Wallis opted for a final punt. He went directly to the airforce commander, ‘Bomber’ Harris.

His first barrier was the word that Harris was weary of seeing a succession of madcap pitches. To such an extent, that he longer considered anything ‘new’. The Wallis response was great;

‘everything he uses was new at some point’

Then he beautifully encapsulated the issue he sought to address.

This is about a specific aim, to take out huge dams and render German steel production paralysed.

His approach worked. Bomber Harris went for it.

In selling terms, Barnes Wallis got the go ahead because;

Despite looking several times like it was never going to work, the German industrial heartland was duly flooded, and the debt owed to 56 heroes that gave their lives for freedom never forgotten.