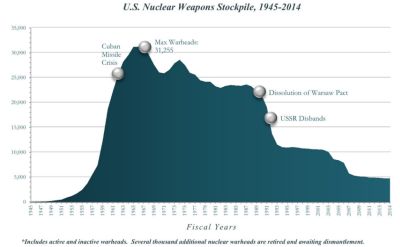 This month is notable for reporting in America of an apparent powerpoint page (according to an American armscontrolwonk, possibly like the one up top) almost leading to a renewed nuke arms race.

Here’s the first murmur summary of an alleged 20 July 2017 discussion;

Officials present said that Trump’s comments on a significantly increased arsenal came in response to a briefing slide that outlined America’s nuclear stockpile over the past 70 years.

The president referenced the highest number on the chart — about 32,000 in the late 1960s — and told his team he wanted the U.S. to have that many now, officials said.

The U.S. currently has around 4,000 nuclear warheads in its military stockpile, according to the Federation of American Scientists.

My Boy Donny has since tweeted that this supposed “tenfold” increase desire was “pure fiction”. Later adding “I don’t want more nuclear weapons”.

Let’s see if we can put ourselves in that meeting room.

You’re sitting down with the decision maker.

You have an agenda.

You feel a little background is first required.

So you begin with a history lesson.

Your agenda shrinks into the distance. Hijacked. Your hopes bombed. And you could have prevented it so.

I’ve always wondered why sales presenters feel the need for a long exposition of what brings us to this place up front.

What’s wrong with starting on ‘current state of play’?

The Origin stuff – although on the odd (specific) occasion it can have a place such as evidence for your unique expertise growth in this arena or extreme cases of ‘wallowing’ for the deftly experienced  – can stay with Hollywood.

People with attention spans longer than President Trump get bored quickly with ‘background’.

Set the objective. Pose the mystery. Enlighten the answer(s).

Ruthlessly check reaction to any key numbers you present beforehand.

Don’t let one of your early slides allow you to get needlessly blown off course.