Just saw the #deepfakes of Tom Cruise and feel like a monkey looking at a spacecraft pic.twitter.com/CRO5NpEMFa

The above is one of a trio of TikTok clips, since deleted yet retweeted by the creator @deeptomcruise; “a parody account to showcase what can be done with technology”.

Deepfakes emerged about a decade back. Yet these examples shot ’round the web to show just how far they’ve now come.

A violation of freedom of speech legal case surely speeding rapidly into view.

As I heard one news anchor gasp, imagine if someone did this fiddling with the nuclear codes. Or pretending to be you, telling your young daughter to meet up with you somewhere, unbeknownst to you.

Lest we suffer from later deletions, here’s a screengrab; 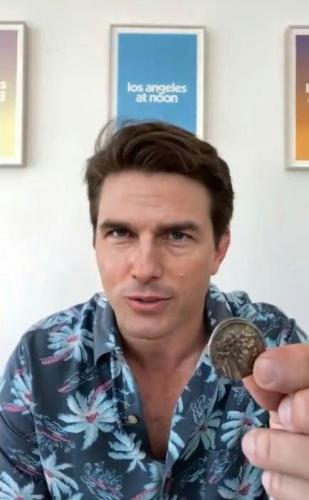 If such setting is good enough for Deepfake Tom, then can it be for us too?

A sparse backdrop can indeed be useful and memorable.

I sense the relief when I pass on to people that simple zoom backgrounds can work a treat.

Just this week I had a delightful zoom viewing someone’s rustic internal brickwork, with a sole mantra poster glistening behind them; shine bright like a diamond.

Tom is beneath a series of posters called Los Angeles At…. Created in 2016 by Julia Luke for The Hammer Museum.

Another minimalist approach. Also getting across an element of personality, culture or attitude as desired.

The snag with our Tom, is that he obscures the lower portion of the poster.

When in landscape rather than portrait mode as on almost all video calls, Tom would be well advised to position himself slightly in between two of the posters.

If you have placed a beacon of what you stand for behind you, then try to let it be seen as much as possible.

And again, nearly everyone I encounter virtually sits dead centre of their screen.

To be off-centre is, I find, a liberating thing.

One final point, is how cool the poster design vibe would make for a winning template of a message slide.

Especially one that stays the same, but may sit across more than one setting…