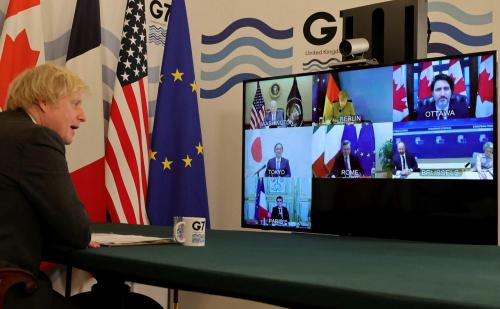 I often encounter the objection myself.

An expression of numptiness that goes along the lines of, ‘we don’t need any help with video calls, as we’ve been doing them throughout the pandemic now and use zoom/teams/whatever as well as slack/or-any-other -‘tool’, so thanks but bye’.

You do wonder how some people got to where they are. And if they’re happy they’ll never go farther.

The various official chroniclers of those involved were quick to upload their elected heads – or in the case of the EU, unelected indefensibles – so we mere mortals could see them in “action”.

Above is the snap shared of the current Chair. Boris Johnson from Number 10 Downing Street.

After year-and-a-half of zoom meetings, how do the high and mighty now present themselves?

Not great, is the strangely subdued answer.

Here’s another angle, via Tokyo, which gives glimpse of the Boris projection. 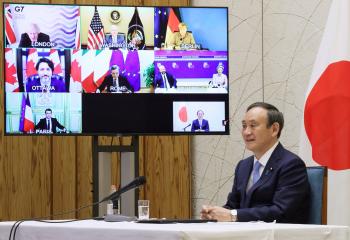 The first and perhaps most important observation is how this is really no more than a phone call with tiny thumbnails. Reducing potential impact right from the off.

Only the feed from Ottawa makes any attempt to decently fill their part of the gallery view. So that others can see their expressions and gain valuable window into the soul.

The general problem is that all are seen as too far away. It’s your screen – fill it. It’s worth noting that nobody deploys the dimensions which decades of television learning have determined are optimal for news readers. These are all sadly significantly smaller in their frame.

There’s many a zoom tutorial stating how far from your webcam you should be. And how much of your screen you ought occupy. This crew likely have clever cameras. Which allow for focused subject enlargement. Operated by a tech specialist. They surely have no excuse.

Look, for instance, how small Biden from Washington appears.

Leaving aside any metaphor in that, the fact remains that these participants know both how they wish to come across and crucially, how their co-attendees will view them. You must marry these two way better than has been done here.

Seeking next a positive, at least they show they’ve picked up that when it comes to camera placement, the higher the better. Although even here, for all but one, it’s perhaps too high. And the less said about the Boris hunch the better.

Thirdly, what about the backgrounds.

Flags very much the order of the day.

I kind of get this. It’s very much the fad. You can almost hardly go wrong.

Sometimes a sole flag, hanging alone can give an image of sleek authority. Other times, an array draped across the entire backdrop can signify bolder branding. Yet here, many of the treatments I sense detract from projections.

Perhaps only the Tokyo vibe works. The rest seem split between the double-flag – I’ve never got that, surely stick to a single version instead of a presidential seal or undemocratic supra-non-state addition – or the distracting.

Berlin’s is all rather blanketing. Ottawa have a pair smothering the speaker. And London seem to not bother placing either Union Jacks in decent view at the proper flank of the screen.

I did wonder whether the advisers of world leaders had heard of the frieze. How much better might a banding of the Deutschland tricolore improve viewing if tactically positioned to fill the top part (upper sixth?) of the ‘cell’? Indeed, pretty much any country could benefit from such an adaptation of their flag design to fit such delivery.

So there you have it. A trio of pointers to try improving how you show yourself.

How does your rig measure up compared to these political luminaries?