I’m okay with oysters. I don’t actively seek them out. Yet have thoroughly enjoyed them all over the world. From New York’s dedicated Grand Central bar bearing their name, to the buzzing Knysna Festival in their honour, to deep fried in Hong Kong, to memorable days with homegrown Irish Sea Notting Hill gastropub decadence.

So I was fascinated to discover a movement calling itself oyster-veganism. Apparently as they lack a central nervous system (like their snail relative) some who forego meat find them acceptable fuel.

The Oyster Lady got a spot on foodie telly promoting these molluscs as “sustainable, ethical and nutritious” fayre.

In doing so, she quickly showed a pasta dish with them. It looked delicious. Thankfully, she offers the youtube demo (above) for fuller consideration.

We’re well used to working kitchen recipe videos. Whether slick tv productions with nothing left to chance, or the genuine homecook experience.

What struck me about this particular contribution, was how The Lady (Katy Davidson) tried throughout to make-up fresh descriptions. You sense these sought to both set her apart and stick in your mind. Here’s her triple wordy rollcall. Each one has a solution selling mirror we can deploy.

Her first misfires slightly. It’s the title of her dish. Sort-of-perhaps a blend of three (Italian) friends’ names in the trade, giving emotion not  seemingly related to the meal. Attempting to ape carbonara is the right vibe, given the dish’s similarity. Why not say, ‘carbonoyra’? The concept though, is sound. Come up with something creative, to match your original offer that builds on something established and favoured.

What if people squirm about the slithery speciality? Here, she evokes subterfuge to go under the radar. Such sweet medicine.

Every bit gets used. The darkened frill (gills) gets trimmed away lest it turn the emulsified meat unappetisingly grey. With the snipped off protein then added to omelettes. Even the ‘oyster liquor’ is prized. The juice you encounter inside the opened shell can be an addition to both a Dirty Martini and a maritime take on Bloody Mary. I cannot believe my local seafood bar does not offer one for lunchtime canine revenge.

There’s even oyster emoji. According to buzzfeed, Facebook have a whole bed of sinister ones. With the ‘standard’ shown below they suggest, Use it to say: “I can do anything.” 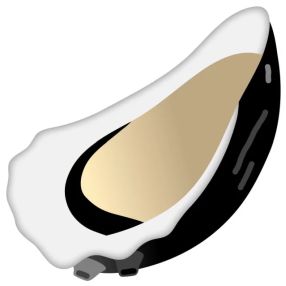 …which kinda leads us onto secondary points, alternative meanings along with if your deal had an emoji, what would it be…?