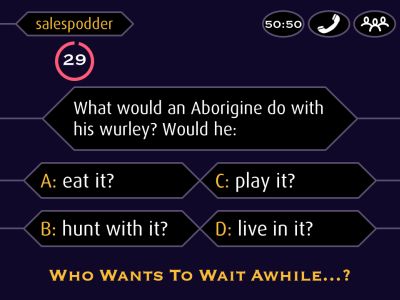 A while back I helped a firm’s large-scale technology sales.

It became apparent that a new way to class suspect buying likelihood existed.

To frame this new view, I gave an example of a momentum indicator (I first blogged on these way back in 2009 via the stockbroker world of traders).

The story goes a chap named Coppock wondered about a possible connection between a supposed length of human bereavement and when a bull market starts.

The theory being that investors would be rendered frozen for a certain amount of time after a downturn before being ready to re-enter the market once more.

Disregarding any merits of the mathematics of this (for me it’s 11 and 14 month view is nearer the tea-leaf reading end of the scale, particularly given Harvard psychology Professor Daniel Gilbert’s contention that the impact on our ‘happiness’ of any major positive or negative experience lasts no more than three months), there is a valid discussion point around whether business buyers are likely to leave a fair passage of time following a significant disturbance before any major re-buying.

A commonplace solution objection we face is along the lines of;

The seller’s heart sinks a little.

In ‘Coppock’ mode, a six-month call back is duly entered.

There are (at least) two main points here.

The first being the obvious how-long-is-a-piece-of-string. Concerning the time it takes for the dust to settle after such upheaval.

Whatever it is, any repetition of canvassing that lamely asks, ‘how’s the [pick your change] going there?’ goes nowhere.

I can picture a gnarly forecast session where the sales manager hears such plight of woe and snaps back that the funnel simply isn’t big enough. Go out and fill it.

Second, a lead from the birth of one of TV’s biggest ever game show hits; Who Wants To Be A Millionaire? So huge a best picture Oscar even went its way, courtesy of Danny Boyle’s Slumdog Millionaire.

The story of its development and take-up is a cracking Sales tale.

As a concept, its pitch was turned down by every telly exec in England.

A relationship did however exist between the show’s salesperson, Paul Smith (friend of the three creators) and Claudia Rosencrantz (commissioner at Britain’s biggest commercial network, itv).

In fact, it seems she’d become quite the champion. Signalled by her willingness to help craft the show further, even down to coining the eventual name.

Then her boss (a Marcus Plantin) left.

Claudia and Paul discussed (at length, back and forth) between them the best time to approach the new guy.

The buyer wanted to wait.

The seller wanted to go in straight away.

He pushed for ‘now’, and asked for trust.

The buyer accepted and teed up the meet.

The resultant 8 April 1998 pitch famously featured a run-through of the game, with real money in cash envelopes.

And the rest, as they say, is history.

You have the solution to a big enough problem, why not become someone’s first purchase too? After all, there has to be one, so why not from you?

footnote: here’s that very first practice/pitch role-play ‘Millionaire…?’ question – at one both way better than the second (What was the length in feet of the Titanic?, which prompted David to shout across the office for answers) as well as a potential lovely tool to get this point across yourself…

What would an Aborigine do with his wurley? Would he: