How do you become the laughing stock of the world? Despite a truly brilliant performance? Well, you massage the figures, that’s how. Here’s the London 2012 Olympics Day 13 medal table example, according to all Americans; 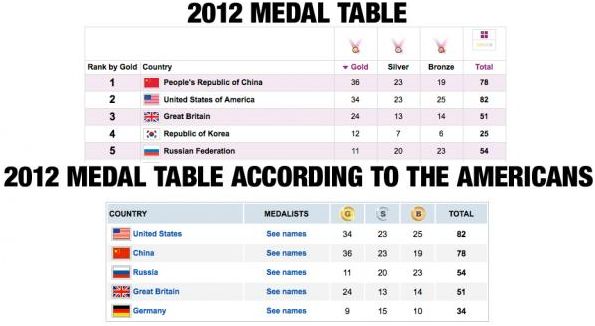 To make it clear, Team USA believe they are number one even though they have not won the most Golds. Crackers.

When this was highlighted on the telly, I checked the blogs. It seems the Americans are in serious denial. They have previous – here’s a 2008 medal table snapshot; 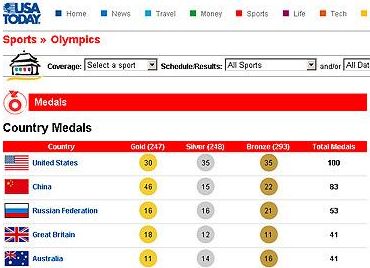 The facts are exposed by one journalist…

the US ranking is based on total number of medals, whatever colour, as opposed to the International Olympic Committee’s convention of using the number of gold medals as the standard, taking into account silver, then bronze only in the event of a tie. Which do you prefer?

So, America is the only exception.

They have their hands over the ears, eyes closed, and scream na-na-na-na.

They go by total medals won instead. It’s not that all medals are not important. It’s just that this way of ranking is plain wrong. The rest of the world knows it.

And they wonder why no-one wants to be like them any more.

Do not fall into this embarrassing spin trap when presenting your figures.