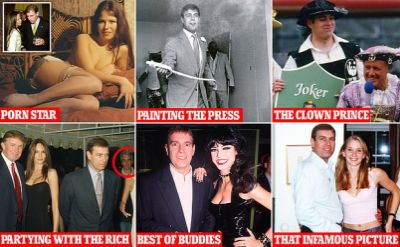 The guy’s a dead loss. His family an offense to democracy. The French had the right idea in 1789.

After his car crash interview last weekend, with so many issues it’s scary but chief among them zero empathy with victims of under-age sex trafficking to which he may or may not have borne witness, to the talentless, toxic ‘Airmiles Andy’, finally, good riddance.

The Daily Mail for one news organisation have been across this for a long while now.

Above is their picture team’s collage from this week of posting. As they headline, The Duke of Hazard: Embarrassing stunts, shocking misjudgments, and very shady friends… the photos that show Prince Andrew has never been far from a crisis.

There’s something I often see missing from decks. Normally appearing as your penultimate slide.

Your ‘sum up’. The pre-wrap-up, pre-exhortation recap of what’s gone before.

Here is a classic such recapitulation display.

A rubric you can deploy whether you have say only four of five themes to namecheck too. As you can always fill the remaining square(s) with other imagery like your key chart without any legend, prospect logo, or simply leave in background colour alone.

In any case, always nice to be reminded to properly balance our presentation flow and make our ending punch as powerfully as possible.