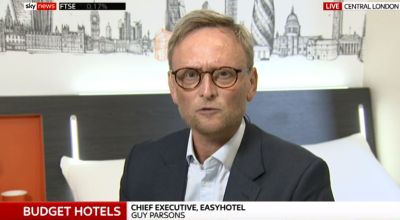 Amazing what you can catch on a company’s reception area telly. This one happened to be showing a rolling news channel. Thankfully not the tax funded state broadcaster’s.

We were told he had perhaps relevant sector knowledge. Having worked previously for, leading even, competition of his current employer. I tend not to be a fan of the milkround careerist, so whilst possibly subconsciously predisposed to scrutinise through a sceptical lens this was balanced out by my eagerness to finally witness true disruption to the shockingly outdated hotel world. Then a question in the middle of the almost four minutes swiftly locked on my sales antennae. It referenced said chief exec’s past;

“How would you distinguish yourselves from those two competitors?”

We face this regularly. Especially when meeting a new prospect. How are we better or different? What do we think may set us apart or give us the edge? Here’s the 170-word answer;

So, you know, one of the key things about Easy Hotel is, is our location, erm, we’re in very central city locations, erm, in the UK and across Europe and into the Middle East as well. We don’t have any restaurants in any of our hotels, erm, because all of our customers tell us that they actually want to go out and, and spend their money and their time in local restaurants and local, er local establishments in the areas in which they’re staying. And, arh, in terms of pricing you mentioned, er, sort of fifty pounds and that’s for London. In fact if you book far enough in advance you’ll be able to stay in central London for only thirty-nine pounds and from only nineteen pounds ninety-nine er, outside London, I mean, the, the closer you get to the day you want to stay the more you’ll pay but if you, you shop early enough you’ll be able to get some really great value hotel rooms in the UK, right across Europe.

At roughly 50 seconds, this response almost has the feel of a classic ‘elevator pitch’. You needn’t pull that yukky emoji face. They do still have a place.

Here though, neither delivery nor message passes muster.

Yet I do not criticise lightly. I wanted it to be a winner. Especially given the hesitant, inauspicious start. And I am compelled to say, there is the kernel of some decent messaging hidden in what was said.

You can get into the reeds of this and talk about a Sinek-style bounding out of bed each morning to cut the business exec’s ever-squeezed travel budget. The hammering at a single point of market rival weakness that goes beyond your possibly freshly pink version of lemonade. Or the trusted hendiatris of a triple threat, in this case something akin to a headline of location-no dining-only fifty quid of which you can then elaborate.

But really, my bigger gripe is that this particular Guy must have some kind of a personality. Sadly absolutely none emerged. Surely the last thing we need is another political corpbot? I suspect they’ve dispensed with real humans manning their forts. A shame as one of them would likely have managed better reading the resultant words out loud.

And on this front, please don’t tell me you’re passionate. Let me feel it from you. Make me go away thinking this is beyond the mere transactional. Namecheck your favourite independent eaterie or two close by your refurbed pad. Maybe give me another innovation somewhere that I could physically see if I were in that room with you. And please, practice and get rid of all those ums and ahs.