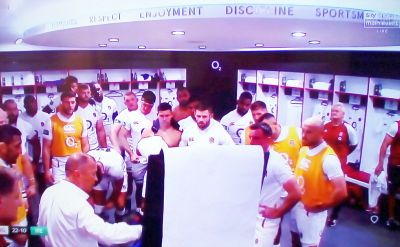 The character that is (Australian) rugby super-coach of England, Eddie Jones, hopes to leave no stone unturned in pursuit of World Cup glory this year.

At half-time in their penultimate tournament warm-up match, despite going behind early, they had Ireland on the rack. From 22-10 up, they’d go on the notch their heaviest victory in the fixture.

Before this eventual 57-15 eight-try rout, we caught a brief glimpse inside the England dressing room at the break.

I quickly snapped the telly.

Our Eddie holding court on a flipchart.

Positioned so as to render the intrusive, wholly unnecessary tv camera feed impotent.

Almost immediately, I realised this scene was unlike many similar I’d seen lately in a Sales room.

Every player focused on the board. No-one sneaking a peek at their phone. No casual chatting and smirking among neighbours.

And what about the activity itself. How often do you grab a brief flipchart moment and re-set during your daily deal halftimes?